Mixing Memory has a piece on a paper asking whether conservatives are less creative and while it's certainly not a definitive study, the results are intriguing, as are the questions raised at the same time. The results seem to follow people's instinct in saying that there is some correlation between conservativism and creativity.

[update: stumbled across some slides discussing what creativity might be.]
Scribed at 12:38 pm No comments:

Does perusing the new Google Maps street level stuff give anyone else flashbacks to the old Domesday Project on laserdisc? I remember being fascinated by the idea of spying on people's homes back then... (Fascinated and haunted, perhaps. But, ooh, shiny laserdiscs...)
Scribed at 10:04 am No comments:

A bunch of livecoding videos showing off different ways to put together sounds through live interfacess (via MJ). Al-Jazari is interesting as it uses spatial movement (of robots) to fire events, which means you can some interesting palindromic music loops going on. Combining it with this game is the logical (and brain-melting) next step, surely... Might have to check out some of the others over the summer though.

If anyone's interested, I'm currently playing around with twitter. Feels like I'm trying to work out what exactly it's for still, have to admit, so maybe I'll just vent some surrealism into it like some big electronic Magritte bong. We'll see. Come, update me on your meagre lives.
Scribed at 11:56 am No comments:

Eh? Amongst all the talk of carbon reduction and the need for nuclear power, it seems a carbon capture power plant has been cancelled after "Westminster delays". Alas, little more information than that, maybe I'll look into it a bit more later...
Scribed at 8:29 am No comments:

According to a BBC report on the findings of the Culture Committee (actual parliamentary thingy, not Boy George's latest venture), copyright on performances may be set to expand like it's on Viagra. I've not read the report - I'm obviously too busy for in-depth commentary, but the reasoning in the article is spurious fun (hehe, or "furious spun"... ahem) that gets close to the Chewbacca Defence ("chew back-a da fence!") in terms of sense. Let's look.

"We have not heard a convincing reason why a composer and his or her heirs should benefit from a term of copyright which extends for lifetime and beyond, but a performer should not," the report said.

This is the usual "X (person, country) has it, therefore Y should have it too" argument, which ends up with each country or affected party leapfrogging the others in a never-ending ever-extending circle of WANT. Yeah. The opposite - that a composer should be afforded advantages that performers do without - would be an admission of SHAME and BACKWARD-THINKING. (Or "gnikniht".)

Extraordinary? Doesn't this imply that there's some correlation between stronger IP rights, and a more successful ("richer") entertainment industry? Are we obviously crazy for having such a weakly protected, yet so successful stab at mindless entertainment? Yes! Obviously.

Maybe the real correlation here is an inverse one. To me, that sentence implies that stronger IP rights leads to less success, but I am clearly gnikniht here. The two quoted artists - McCartney and Cliff - obviously continue to contribute to the ongoing and progressive success of UK music culture by... uh... living in big mansions? Threatening to shoot themselves in the head? I'm not sure. I did manage to sell Paul's "Flaming Pie" album to a second hand shop for a couple of quid once. I got laughed at (for owning it, not for the price), but that was effectively lunch so I couldn't complain. INDUSTRY SUCCESS!

Anyway, enough capitalised ranting - uh, I mean, public awareness. I'm off to start a "musicians are all lazy f**ktards" campaign to see who really cares about entertainment, dude. Who's with me?

p.s. please don't bash me over the head with guitars next time you see me
Scribed at 4:35 pm No comments: 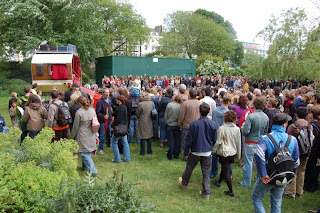 Inebriaed chaos, entropic surrealism. That was generally how I thought of the Streets of Brighton during the Festival in May. Last year's Brownian wandering yielded a fetish spherewalk, primaeval
rituals and businessmen who had just worked too much overtime, amongst everything else.

But the photo on the right is more of an indication of this year's festivities. Maybe we just didn't wander around enough, or maybe the grey weather got to me like a wimpering clown, but the "downsizing" effect certainly made a difference. Most things we saw were "installations" timed to go off at regular intervals. There was a timetable, which advised you to plan what you were going to see. There were tall people ("aha, so this whole post is a height insecurity rant.") standing behind the children, which left mea bit out of it. The random encounters ("you have been eaten by a camped-up grue") were lacking. (Although I did finally get to meet the very un-Mr-Ed-like NIN-style horse-machine. "Jack" says it was funny. Believe him not, it was freakin' terrifying.)

The whole thing seemed a lot more "moderated", and definitely geared towards kids, like several circuses (circii?) had been brought together for a weekend, only without the candy floss. So I guess it works if you're a kid. But it left me feeling a bit, I dunno... normal, perhaps. Like I was wandering around a museum, rather than pounced upon by bolts of "wtf?"

Still, I got about 4 decent photos. Will stick them up soon. Just be interesting to see what they do with it next year. (Start charging?)

Odd, isn't it, how the biggest popularity spikes are centred on war and death?

I mean, I know it's easy to cite the war with Eurasia as insightful commentary, but there's something... professional about a graph that just brings it home. Violence = Popularity. Fear = Rallying.
Scribed at 12:29 pm 2 comments:

Bah, I hate that 2.0 moniker, but it turns out there are some important trends going on, and having a name to captcha them just makes writing easier. Maybe you could change that title to "Information Economies vs User-centric Services".. but then you'd still have the equally appalling first 2 words. Anyway.

The Browser have a short interview with Jay Adelson, the CEO of Digg, following the media-grabbing furore yesterday. Why am I linking to that? I dunno, it's not relevant. Here's a random thought.

We keep hearing that we need to make a shift to knowledge economies/information economies if we're to survive - at least in the UK. Production is no longer a feasible option because, well, we suck at it. Innovation and creativity are the new ever-faster buzzwords - sell the ideas, not the things. Because when you have a network, virtual things are easier to sell than tangible things.

But the ruckus over the AACS key shows how flakey this relationship between economy and network is, and how much flakier it's got with a move towards more community involvement. An economy built on digital networks is an economy built on numbers, and as we've seen (multiple times - recall the exact same fuss over DeCSS), numbers out of context are, well, just numbers. The speed and manner at which both the AACS key and the DeCSS code spread reveal the philosphical flimsiness that we hope to build a brave, new world on.

This is why anyone that's smart will be investing in DRM and Crypto, at least for the short-to-medium term. Despite moves towards less DRM, keeping these numbers a secret is what it's all about, and what it'll increasingly be about.

The kicker is that, by fostering a greater sense of community, we now have a correspondingly increased sense of community ownership of information, even when that information might be designated as "illegal" (if, say, acquired through illegal means). Decryption keys are there to stop consumers doing what they want with content. Communities of consumers are inherently against that kind of control.

In a way, this is nothing new. The difference now, I think, is that both sides are gearing up to become larger forces. Crypto has enjoyed relatively limited success, boosted mainly by the need for secure shopping communication. Communities have been around forever on the net, but only now are being more fully, more richly "exploited" - i.e. for commercial means. In a sense, there are 2 economics camps - one (the "information economy", perhaps) that thrives on privacy and isolation. The other ("community economy", maybe?) that gets off on freedom of information and lubricated lines of communication.

It'll be fun to see how the two get on with each other as the pressure builds to virtualise even more stuff.
Scribed at 12:48 pm No comments:

An Invitation to Love^H^H^H^H Joost

Subliminally, that title reads "...Love Joost", with a ! implied. By bringing it to your attention, the subliminal effect is over-ridden and you are safe to read the following with no marketing bias.

Apparently Joost (with funky https address) has gone "open" - beta testers now have an unlimited number of invites. I'm one of these videomonkeys, so I should be able to invite anyone that wants to give it a go (although I'm behind a proxy at the moment, so can't check this...)

If you need an invite, leave a comment, or get in touch with me via one of the usual routes, with an e-mail address, and I'll see what I can do this evening... (I may need a full name too, so if I don't know yours, and you don't want one made up by whatever creativity is left in me, include that as well.)

Been too busy to have caught up properly yet, but just noticed that May's 26 Things list is out. Wanted to have a go at this last month, but April's list never appeared. Yell if you're interested in giving it a go too...
Scribed at 3:08 pm 3 comments: