Almost missed this. Monbiot tells it like what it is.


"In the name of environmental consciousness, we have simply created new opportunities for surplus capital."

If only there was a way to list everything you owned.
Scribed at 4:56 pm No comments:

Land Grab of the Soul

I was thinking of posting something about the soul, individuality and all that snaff, and the lust for social connections and social validity brought about by the Internet, but fleh, yesterday's Zippy strip does the job better than I ever could.

Maybe it's time to go out-line for a while soon.
Scribed at 3:11 pm No comments:

More research linking cannabis with psychosis, and while correlation between the 2 is admitted by the study authors (alternate hypothesis: psychotics may take up smoking more), it doesn't appear until after the first header break, and even then only gets a small paragraph. The tone of the article is definitely more concerned with a pre-decided, straight-forward "cannabis will break your head!" line.

Been reading a couple of Castaneda books recently, which deal with psychotropic drug use to arrive at a different "view of reality" (actually, it's more about breaking from your "established" view, which probably explains why it's banned more than anything). That drug use is not a necessity (a point made clear in "Tales of Power") is not the point. The relevant message here is thoroughly in line with Leary's message: Drugs are a Technology and, as with all technologies, is inherently Powerful. But whether they are "good" or "bad", "harmful" or "liberating" depends utterly on how you use them. Giving a gun to a baby is stupid. Driving a car if you're blind is stupid. Using a laptop in the rain is asking for warranty troubles.

Unfortunately, the state of British drug policy is overly (or perhaps underly) compartmental: drugs are for "leisure", "medicine" or "harm". The alternative state of "exploration" is curiously and constantly overlooked. Drugs can be dangerous, but surely that's why they should be treated with far more respect and understanding than we give them today.
Scribed at 11:04 am No comments:

Nano-clockpunk?
Scribed at 11:17 am No comments:

...so I ordered the new UNKLE album, "War Stories", as the super-dooper-Limited-Edition 2CD magic thing package, but got an e-mail today from Play saying they'd run out, or aliens had vomited on them or something. Bah. One quick trip into town later and ta-da!, one cleverly vacuum-packed well-posh-innit music bulk in my possession.

Note to fancy designers: If you're going to vacuum-seal your limited edition baby (not literal baby. I hope.), you can bank on increasing the value by making it only openable through precious-packaging-destroying maneuvres, or near as taodammit that the "war stories" of opening it make it go down in history. At least, I'm assuming by sucking all the air out of it, things get "tight" inside...

After 5 minutes of palm-slapping and vague physical sadism, I resorted to the Gordon Ramsay approach as recommended in the last link: 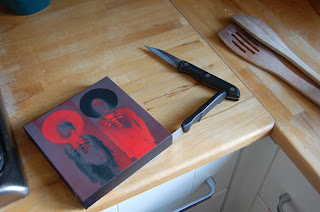 Unfortunately, the tiny-but-pointy brothers failed in their task. The wooden spat-u-twins in the background were similarly akin to pushing buttered pigs up trouser legs to get the ferret out. So the big boys came out: 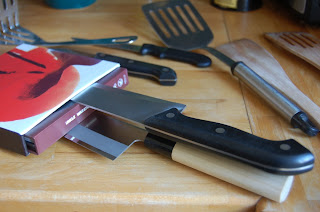 Success! And extra magic bonus points for not slicing and dicing own wrists in process. If you're reading this after wondering what your "new" album (bought a month ago) sounds like, then I recommend using it as an excuse to go out and buy a pair of big FO shiny Knives. Japanese ones are "cool", apparently.

All in all, I quite enjoyed this challenge. It provided a welcome variation to the little milk cartonlets you get on planes to annoy the person behind you. I give it a 7.5 out of 10, although it'll be a while before I'm brave enough to put the CD away again. (Listening to it now, it sounds pretty good, which is also a handy win.)

p.s. am away for 2 weeks, so don't go eating my cheese. Help yourself to tea though.
Scribed at 6:43 pm No comments:

Laughing Squid has photos of some 7-Eleven stores in the US being taken over by Kwik-E-Mart for the new Simpson's Movie.

Personally, I love the way satire and piss-take weave their way back into reality, like a hungry robot badger chasing down its flesh-filled counterpart and mocking it with cruel beepnoise: 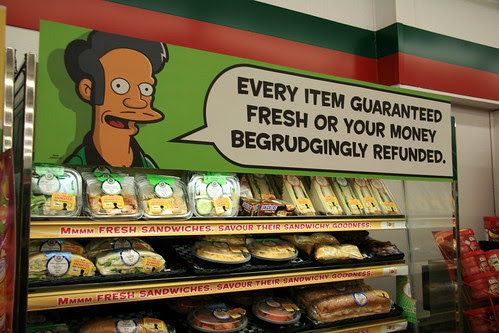 Striking a balance between music and fun

Quick follow-on from the death of Fopp. There's greater discussion of it at this Times article on the new "Rough Trade" store. It's a few days old, so it talks as if Fopp were still a living, breathing musical beast, but it sheds light on the position of the supermarkets:

"Although Tesco rang up record profits last year and increased its share of the music market, it did so by squeezing prices so hard that it lost money on the CDs it sold."

Looks like HMV and Rough Trade are trying to become more "cafe"-style-oriented-whatnots: grab a drink, sit down, browse the net, play games, etc. Music comes in there somewhere.

If done right, I think that could work. Strike a deal with last.fm, or set up your own recommendations thing, aim for the rich people who bring in laptops, or provide some simple web-terminal-cum-radio thing, get people to set up their profile or plug an existing one in, and let them listen to recommended music. A "modern" service might even get customers to recommend things to each other - maybe some kind of "request a recommendation" system that would let you post your favourite band, acquire similar recommendations, and then wait for you to come back and check it.

I guess you have to have both things though - a decent system for recommendations/sampling and a place that people actually want to go to. A wifi'd up cafe is nothing - I can get that from anywhere. Similarly, I can get recommendations through last.fm, amazon, even friends yeeikes. But serve up a personalised sampler CD with a hookah (are those things illegal too now?), throw on the odd silent disco and you've got a winner, baby.
Scribed at 9:30 am No comments:

Games are more than fun

"New research dispels the well-worn stereotypes that computer gamers having no social skills and girls avoid violent games like Grand Theft Auto", apparently. Some of this is "well, duh" to people like me that have grown up with games. For instance:

"Two-thirds of boys aged 12 to 14 and one in four girls had played an M-rated game (meant for those over 17) in the last six months."

C'mon, how many of us had seen films rated way above our age before we reached "maturity"? I remember my physics teacher showing us Predator on the last day of term (minus the boring, talky bits, of course). Interpreting a) violence and b) films (or storytelling at large) is a way important part of growing up that people seem to overlook. Grimm Brothers fairytales? Violent. Roald Dahl? Sick. The world is disgusting, we'll find ways of sorting out that information way before we're 18 (or probably even 12).

"Children used games to help them manage their emotions. When angry or stressed they liked to use games to get these emotions out."

Much like adults then, I would assume. This highlights the difference between games causing violence, and games containing violence (perhaps even violence "causing" games...). The debate over whether gaming causes violent behaviour might as well be the same as asking whether punching bags cause violent behaviour (another, more "real" simulation of violence). Same goes for music - we don't need to stop people from being violent - they're violent and nasty by nature, half the time (the other half they're quite good, really). We need outlets. (Hey, does this mean we need more violent games for kids?)

The second part of the link deals with the sociability of gaming:

"When I was a lad computer gaming was a very unsociable activity. This was partly because good multi-player games hadn't yet been developed. Now players can battle each other while sitting side-by-side, or virtually across the internet."

This shows, I think, an intriguing trend in the development of computer and console gaming. When I were a lad, computer gaming was extremely sociable - a lot of games in the Amiga/Atari landscape were at least 2 player, and we often gathered for bouts of 3, 4, 5 ... even up to 8 players, all at the same time. The relative failure of Sega's Dreamcast and Nintendo's Gamecube are irritating signposts to, from my perspective, the less social nature of games. PC gaming (over the internet), the PlayStation (in all guises) and the XBox (both with less than 4 controllers by default) mean gaming - again, for me - is a lot less fun because it's a lot less sociable. (No coincidence that I sold my PS2 recently, but am keeping the Dreamcast and Gamecube.)

That said, I think there's a lot going for narrative and story in games - "immersive storytelling" is far more of a social experience outside the gameworld than a straightfoward romp through levels one at a time. Games then have become more like books, or films, in that "consuming" them is a generally individual experience, but one that's shared with other people who have gone through the same thing.

Perhaps this is the amazing thing about ARGs, which have filled a gap which videogames have tended to stay clear of on the whole - they involve a group in a story, so both develop as the game is played through. I'd love to see more of that in videogames. (Well, I would if I had time to play them ;)

"We lived above a convenience store..."

An interesting cross-blog thought-gather as we start to see the effects of networked modern capitalism on culture retailers.

Guy noted the death of Fopp which got me wondering (in comment form) about the ol' "long-tail" thing, and the possibility of a polarisation - a split between the mainstream music retailers (who are now becoming supermarkets & iTunes, rather than "traditional" music stores) and more independent/social chains (such as bleep.com and, uh, iTunes...).

And Richard posted about the point of giving away popular culture when there's a chance the publishers could make more money keeping it at the RRP. My comment there was more on the nature of supermarkets, it turned out, but goes a little way to expanding on the death of Fopp.

Supermarkets represent convenience - time, space, all your weekly food in one big go. But now that convenience captures something bigger - convenience lets supermarkets sell branding (read "hype") like nobody else. By distributing all sectors - clothes, entertainment, seasonal products and even food - an entire marketing department is represented in one fell swoop. Supermarkets don't sell Harry Potter books, they sell Harry Potter. Horizontal Conglomeration emerges into a never-ending run of Lifemarks: one month, DanBrownerise your life. The next, Fantastic4ForAll! Content owners love supermarkets, and the feeling is mutual.

But where does this leave everyone else? Fopp and HMV can't keep up because they don't sell clothes. Independent music survives because it is easy to give away, easy to spread, easy to hook people into. You can listen to 10 albums in a day, but it would take you (ok, me), a year or more to read 10 books.

The most obvious course is to copy your competitors - branch out, start becoming not just a music store, but an integrated music experience store. But even that's a losing game - supermarkets have been playing it for too long.

So where next? Are we doomed to be dominated by a cat-and-mouse pirate fight between "the corporation" (think Rollerball) dictating the theme of the month, and "weenies" who are here one day and gone the next (either because they existed for novelty value's sake, or because they get bought up by the goliaths)?
Scribed at 11:57 am 3 comments: