There are those times in life that you can be prepared for, or at least try to be. A driving test, or a meeting, or your first date with someone, or visiting somewhere strange. We can get some idea of what we're facing from people who have been there before and once its all over, we discover that we were right to listen to those people who have done it before. We can pick up a copy of "How to Pass Your Driving Test". Somebody, somewhere, has probably written "Timbuktoo for Dummies".

Then there are times that, no matter what you do and who you talk to, you just can't prepare yourself for. Times when it's impossible to know what to do, and so when you're in them, going with your instinct is probably the best bet you have.

On December the 10th, Lawrence Jupp was killed in a motorbike accident. The other morning, on December 28th, Joe Holmberg lost his battle against cancer. (Sorry if this is new news to anybody out there. Please feel free to get in touch if it is.)

For some reason, I'd delayed blogging about the former. A lot has happened in the last few months, and I was going to get some kind of "retrospective" together for the New Year. However, in light of the news about Joe, it seems better to post something now. There are some kind words by both Dave, Amy and Joe about Lawrence. Many goodbyes were said at his service last week. I'm sure similar missives for Joe will be forthcoming*. There's a post by his parents here.

All the things said about Loz in posts, comments and services are all true. His infectious grin was only out-infectionised perhaps by his ability to not let problems get in the way of having fun. (Or, indeed, to remind us to have fun instead of problems.) In fact it was, I'd say, such memories of Loz that kept me "bold" after hearing the news of him. But he was far from egotistical, or hedonistic. Sensibility, like his drinking songs, would kick in at Just The Right Time. So too would a genuine empathy for people in times of need, and a passion to "educate" people in the arts of anything from cooking, to hiking, to drinking just One More Glass. Looking back, this honesty - sometimes brutal (but never aggressive, and often self-directed) - is something I respect him most for. Perhaps it is because it is a quality that needs to be reawakened in a time of "political correctness". Perhaps I just knew, at least, where I stood with him. The world will be a much quieter, much sadder place without Loz.

I wasn't sure about placing two memories in the same post. Are comparisons made? Is there too much risk of repetition, to the point of insincerity? Who knows. It would be fair to say, though, that Lawrence and Joe were quite different people - almost opposites, in some respects. That doesn't, of course, diminish the impact that either made on me, or the extent to which I love and admire both still. Both were hugely courageous in different ways (and both far more courageous than I). Both were creative, immense fun, caring and, most importantly, full of life. 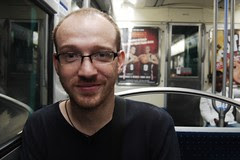 The last few months have obviously been difficult for Joe, his partner, Emilie, and for his family. I went to visit him a couple of weeks ago in his flat in the Chinatown of Paris. Screams and yells sprang out of a cold schoolyard below, but inside the flat, an obstacle course had been constructed of all the things we normally take for granted. Sudden changes in air temperature, such as a cold bathroom. Salt. Stand-by Oxygen. Stairs, just to force someone to invent a mechanical contraption to magically - noisily - raise a keg of air to the right door. We ate food, we watched some TV (decent TV, like Napoleon Dynamite and Takeshi's Castle), we slept. As one might have gathered from his blog, sleep was vital for Joe.

But he was still Joe. He still chuckled his Joe chuckle. Still apologized profusely if he thought he was inconveniencing you by, y'know, having cancer or something. His French was coming along nicely (outstripping my paltry GCSE memories by un mille). He was weak, but optimistic. Thin, but still smiling like a trooper.

On Monday evening, we got the Call about Lawrence. It's odd how a moment like that can act as a lens. For reality. Something biological kicks in, a neuro-clarity, like when you see blood on the street. For that moment, it was like we forgot about the Cancer and dug up old memories instead. "We're all getting old," we said, and drank Port. On Tuesday morning, Joe went back into hospital.

"Talented" doesn't even get close to describing Joe. He combined amazing wit, intelligence and artistic flair, with a humbleness that meant everyone he met couldn't fail to be impressed by him. He was infinitely cool, but would never, ever entertain the idea. Everyone knew his musical endeavours, but he was also a bit of a writer. Time after time, people would comment on how well written his blog was - another thing to aspire to, I guess. (I'm certain he was also building up a collection of great sci-fi short stories on his hard drive too.) When he came up with Krauschanl, I was impressed I could still be surprised by him - there was no way of telling what he'd be dabbling with next.

Above all else, I shall miss Joe's ability to distort a perfectly normal conversation - usually via Messenger - into a surreal world of mashed-up ideas and typo'd parallel universes. Asking about arrangements, or a project we were working on, could turn rapidly into a freeform st(r)eam of consciousness, directed only by our mistaken and overly-eager keyboards.

We "evolved" a habit of coming up with e-mail-esque signatures when signing off our instant messaging chats. It would have been poetic to have posted here the last one he used. But hard drives are hard drives and Scribes are fallible, and such a thing has now gone the ultimate way of all things. Instead, I'll end this post with a sign-off signature line that Joe submitted to me for use in my e-mail. I don't know if what it says is true. But, for me, it at least sums up his surreal creativity and his robustly down-to-earth sense of humour - facets of Joe-ness that he carried with him to the end. It even bears the post-full-stop double space that I always skip over. Joe always was a stickler for grammer and speling.


I met both Lawrence and Joe in 1997 at Sussex University, and lived with both during most of this time. They were two very different souls, but both great people. Losing them both is a reminder of just how frail life really is, and what value friendship has.

--
"Think of death as a medium-sized yellow robot. That should help."

Labels: The light that burns twice as bright.

A: Acceptance.
B: (Eternal) Optimism.

or "OK, we have no idea what's really going to happen."
Scribed at 6:04 pm No comments:

Macs increasingly targeted for Malware, but not apparently for either of the 2 reasons I would have thought: a general audience for virus writers (as a whole) to exploit, or more geeks/hackers using Macs, and so having the hardware to hand.

The reason? "the jump in attacks against Apple appeared to be the work of a single gang of professional hackers..., known in security circles as the “Zlob gang”" (Nor do they really "hack" anything. Trojan Horses and playing on users is more their style.)

The hacking world really has moved on from what it's traditionally been, which is a huge shame in a way - the philosophy gets lost as money pushes it out.

(Also, is it just me that reads "nice" in the sentence "years of catering to a niche audience" as "nice" with a funny pronunciation? Thought so.)

[Update:} See also the accompanying FT tech blog comment. Does this mean that the Internet (or Macs?) have finally "come of age"? At what point does a nation start mandatory computer driving licenses, so that all users know what to avoid clicking on? (Imagine if car drivers didn't have to be tested on their road signs.)
Scribed at 9:15 am No comments:

Where Bayesian Recommendation Systems don't Get It

I really like this article over at the Huffington Post on the mundanity of collaborative recommendations, such as last.fm, amazon, etc. (Via advertising lab.) I agree completely - yes, such services work well*, but there's also a real kick to discovering and making the choice yourself, which gets overlooked. The psychology of finding the brilliant amongst the unexpected, but also the openness of eclecticism as a personal trait. In other words, why do we like the next thing that we like? Is it all just based on what we know?

Aldorno (or maybe Baudrillard, all foreign names look the same to me) seems to like the idea that the more we kill something in our culture, the more we have to re-create it. "The lady doth protest too much." I wonder if some of that is true here - the more we construct "recommendation blankets" for ourselves, the more we want others to know what new things we've picked out ourselves. As the system tells us about ourselves, do we assert our "individualism" from the system more than ever?

* Curiously, I actually tend to ignore most "recommendations for me". I can think of 1 or 2 that I've really liked, but in general, for music at least, I prefer trawling something like FIP or Radio 6 for interesting stuff.
Scribed at 9:12 am No comments: