Irregular readers (I fail to believe that I have any "regular" ones. In the head.) will know that I love bees. I was introduced to an infant hive in the middle of Devon in the middle of last year, and for some reason (probably that sugary food substance they give them) they made quite the Impact on me. Maybe I love the notion of the swarm community, the altruism of the suicidal sting, or the side effect of helping flowers to grow, just from moving around.

So it's great to see the Co-op are banning pesticides linked to colony collapse and so many other countries taking this seriously. Too often, we only see Inputs and Outputs - bee hives, and honey. But bees exemplify the idea of a system, the myriad other inputs and outputs that blur into a single, circular process. Side effects. Accidents. Opportunity. Feedback.
Scribed at 8:45 am No comments:

Phil points to an article by Robert Paterson on the post-job community world. This echoes a lot of the thoughts and feelings I've been having over the last few months as well, but could never set them out so analogously and clearly. See, just like that last sentence.

The notion of having skills is hugely important, although I would say 2 more things will be essential over the coming years: 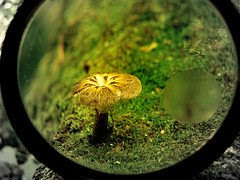 One, dedication to reality - the balls to know what will work and what won't, to dismiss hype, optimism, pessimism and, dare I say, even hope if it turns out to just be more optimism in a mask. (Experiments pending.) Knowing what's really going on will let you respond to events before those events have happened. Preparation is sorely lacking in a lot of modern decision making.

Two, flexibility - it will be better to become a Jack of all Trades than to specialise in a single thing. Progress is here, dammit. I hate the progress treadmill as much as you, but we have the infrastructure to communicate widely and instantly, and we have a lot of very, very clever and creative people talking to each other over it. Change will come - what matters is how you filter that change. Flexibility mainly means being ready to give up what you know, cutting yourself loose from the idea of "identity" formed around function and knowledge. 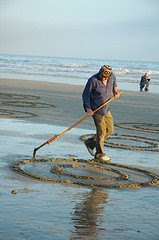 If I think about this with my Harmonious Technology hat on, what does this mean?

I think it means this: we have to build the world we want to live in ourselves, because we can't rely on markets to let us just buy what we want any more. We have to become post-civilised. And if we want everything to make sense, we have to start building sense into our infrastructures.

We need Zenpunk.
Scribed at 7:55 pm No comments:

After introducing the idea of Harmonious Technology last week, I sat down with a pen and paper and started getting some "proper" thoughts together.

I've collected these thoughts into a Google Doc, with the intent of opening up the discussion through it. It can be found here:

In summary, I've sketched out just my initial thoughts - the concept, some background, some possible examples, etc. It still needs more thought, if you have some ideas, get in touch and I'll open up the document for editing. The ideas in the document are still very rough, so I figure discussion is the best way to clarify and smooth them out.
Scribed at 7:41 pm No comments:

Labour MP protests against Heathrow expansion by picking up the Mace in the House of Commons.

Does anyone know if this falls under the SOCPA anti-protest law?
Scribed at 7:01 pm No comments:

Quietness and Effortlessness: A Manifesto for Harmonious Technology

This year I want to think about the idea of Harmonious Technology, stemming primarily from a taoist principle of alignment and naturalness. All technologies, like humans, are not created equal. Tools cut across a wide landscape of use, and complexity - some are easy to use, some take experience and "artifice".

What I'm interested with the idea of "Harmony" here is technology which, perhaps for want of a better phrase (but perhaps not), is not even noticed. Technology that gets out of the way. Technology that we use like we hear - without thought, without judgement, without a look of confusion.

I feel like there should be some principles to sketch this idea out further, if it's to become something worthwhile, something tangible. As an initial brainstorm, not even something in a bulleted list yet, I think the following need to be factored in: Harmonious Tech should be instantly understandable, should integrate with the environment rather than detach a "user", should not break, and should deflect attention away from itself. This is just a messy start, though. It needs to be refined, simplified, mapped out. It needs to make sense. It needs to be whole.

At one level, I see Harmonious Tech as an HCI thing - that is, how technology integrates with individuals. But I think the concept could equally be applied to technology at a societal level. We spend so much time talking about, for example, the way in which we communicate and "the next big thing", to the point where we no longer talk about whatever it was we invented the technology to help us do. In the same way that we've come to depend on money to make money, we've also come to depend on technology to provide a reason for technology. Maybe this is a singularity forming, a reflexive, recursive ball of discursive nothingness wrapped around on itself. 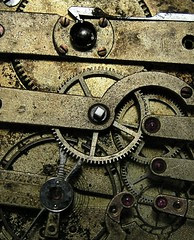 Or maybe it's a society with its head up its arse. Instead of working out to live, we spend our energy showing how much about the future modern world we know. Harmony is turned into Catch-up. The cogs spin ever faster and get ever smaller.

Harmonious Technology seeks to go in the other direction for a change. Instead of seeing the cogs as technology, it sees technology as the grease to keep the cogs, that we already have, run as smoothly as possible, so that ultimately what we get out is not more grease, but whatever-it-is that the cogs have been set up to do.

What, 2009? Already? Crap. I haven't managed to post half the blogposts I'd like to, or eaten half the things I was hoping to. Probably just as well, otherwise I'd quickly run out of things to do.

Looking back to the last egospective abut a year ago, it's interesting to see what's changed and what hasn't. The year's gone quickly. I got a job that I'm still in. I got engaged. I have some cool new t-shirts. I discovered Dinosaur Comics. All in all, 2008 was a plus, I'd say.

On the resolutions front.. hmm, let's see now. I made 3 (same link as above, how quaint), so here's a brief rundown of how successful they were:

1) Spend more time on blog posts Hmm, well that didn't work. I achieved part of the goal - cut back on the drivel and the shorts, but failed to find the time to fill the gap with substantial happiness. I blame work, but in a good way.

2) Get rid of books: Again, partially successful - I don't think I bought as many books as I have in previous years. And I have a small stack of books lying around which I now just need to, you know, get rid of. (Hey, if you're interested in a book, let me know and I'll tell you what I have/send you a random one. Maybe.)

3) Make fire: While the original idea was to make fire from scratch, I'm going to count this as half a win (oh! how predictable!) seeing as we actually got our fireplace up and running and I've been learning how to SET FIRE TO CRAP. On a scale of Fun to Ten (heh, you like that?), it gets my vote.

The moral of the story is not to make resolutions. You always think you have the rest of the year to do them.

2009 is looking very promising so far, and very exciting. Everyone I know (including me) is getting hitched, which leaves precious little time to actually get anything done though. So far, here's what's struck me as possible:

1) Government is finally getting its head around the web, partly by force and partly through some kind of understanding seeping finally into the bones of British society and culture. I will, however, be forcing myself (again) to avoid the use of any term that ends in "2.0", on the grounds that it's generally v2.1 that actually works as you want it too. Hopefully this means I'll get to post more to Sphereless the blog though.

2) Being the proud owner of both one of these and one of these, I'm thinking some music making is in the pipeline. Already I have discovered Eluvium the band, which leads me neatly into...

3) ...simplicity. I seem to have entered 2009 with a lust for a quieter approach to life. I have been reading Presentation Zen the book but also perhaps getting to a point in life where ideas such as taoism start to really piece together. Soon I will be 30 which if you tip it on its side is also the symbol for Taurus which is also my starsign, so I figure the energy must be strong on this side of the moon. Nevertheless, I may actually post some thoughts on tao and tai chi shortly, for they are currently actually the most fascinating thing around in a non-fascinating kind of way.

These are already three hugely exciting areas: Politics, Sounds, and the Soul. Currently they are fragmented, but perhaps, just maybe, I can bring them together, along with everything else I haven't mentioned like photography and food and jigsaws.

So all in all, I am looking forward, not backward, to 2009. May yours be equally exciting and invigorating.
Scribed at 9:10 pm No comments: