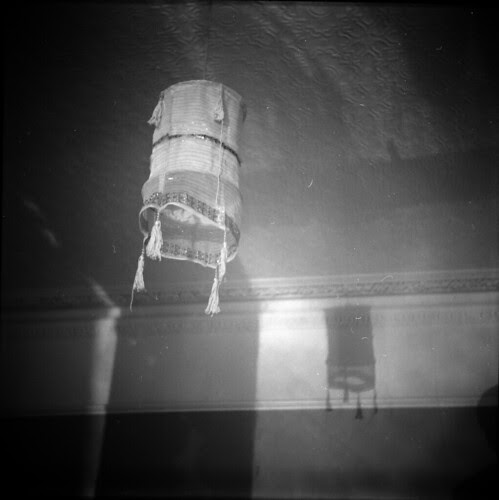 So it's been about 3-and-a-half weeks since the ceiling of our living room came down with the noise of rushing waves at 2-in-the-morning, and since then life has been fairly hectic.

We spent a week doing the nearest you can get to sofa-surfing with a heavily pregnant wife - the cosy spare bedrooms of friends and family was a nice getaway for a week with some interesting thoughts, but ultimately one has to live somewhere. Finding a place to rent (especially in Brighton) these days isn't a particular walk in the park, but the Gods smiled a wry smirk on us, and this weekend has been full of cardboard boxes, white vans and friends lifting heavy things with us.

Our new place is… different to where we are now. Where we are now there are high ceilings with fancy wallpaper (which was probably all that was keeping the ceiling up for 3 years, to be honest), and creaky floorboards that wake everyone in the house up at 3am. It's nice being able to walk to work or into town or to the train station.

Our new place is more solidly built - it has things like, y'know, ceilings, and underfloor heating and a balcony. It also has CCTV and someone who comes round the block of flats and takes your rubbish away at 9am apparently. And a fishpond outside full of koi carp, and a communal swimming pool that closes in about 2 weeks for winter. Oh, and a bus stop to get you into town.

I shall miss the old German woman downstairs who tells us her life stories, and the delights of Seven Dials such as the Seven Dials directory, and the Moorish takeaway owned by the partner of Dave Broom, whisky Thor, and the green curries of Thai Pad Thai (ne The Little Buddha). I will miss the moody cats and the man opposite with the orange camper van that he gets out on nice days to take the family to who-knows-where. I won't miss the students upstairs quite so much.

Yes, I seem to have gotten old. I hit 30 (OK, over a year ago) and life caught up with me. I think I've started to maybe appreciate the little things more though, like cups of tea and warmth and things that work and going to bed at 10.30. I now know what a Loss Adjuster looks like.

Maybe things are about to get really exciting.
Scribed at 4:01 pm No comments:

A few weeks ago, I took delivery of a batch of old records that my dad was getting rid of, to give to an ex-colleague who has recently got into vinyl. I thought this would be fine. But, to cut a medium-length story shorter, I ended up buying my own turntable and keeping a handful of the records myself.

Actually, it was a joint decision between Mrs Scribe and myself. We both probably got into music about the time that vinyl was still fairly "available" and CDs hadn't quite made their full mark. This was a time before Napster, before crap CD copy "protection", before digital radio. The handful of vinyl between us was enough to spur on some nostalgia.

As a result, the weeks since then have been dottily interspersed with diving into second hand record shops, browsing dusty rows of LPs, and digging out stuff which we think will "sound good on vinyl". Ella, King Curtis, Zeppelin, Kate Bush. I even re-bought something on vinyl for the first time - Sigur Ros' ágætis byrjun - one of the few albums that's been such a part of my life, I would pay to have it in BIG FORMAT.

In a way it's this big format that has made me start listening to music again. I mean, really listening to it. Sure, I buy albums and download MP3s every now and then and there are some fantastic tracks out there. But time in the 21st century is tight, and it seems either harder to make the time for music, or easier to squeeze it into the gaps - I'm not sure which.

The inconvenience of vinyl is also its charm, for two reasons:

One: There is no "pause" button. If you're interrupted, you miss it. You don't just rewind to re-play something, or fast-forward over the bits you don't like. The only respite you get is in the middle, when the stylus reaches the end of side A. Vinyl picks you up and forces yo to listen.

Two: Physicality is what makes music in the first place. Holding a disc in your hands, knowing that tiny divots create vibration and that any scratches will be turned into sound - vinyl is far closer to a real instrument than digital. There is no "wrong" or "right", only what the turntable feels. If the disc skips, nothing corrects it. If it crackles, that's fine. There is an acceptance that the medium is a part of the music, rather than just something else to get in the way. And if you break it, there are no back-ups.

Don't get me wrong, I like CDs and MP3s, in the same way that I have a digital camera as well as a dozen film ones. But vinyl is one of those dying items that still tethers our emotions to the world around us. Once we are used to disposability and infinite replicability, do we no longer pay attention?

Forget all the arguments about whether vinyl sounds "better" than digital. The real joy is in seeing the thing go round, the turntable arm slowly progressing towards the black hole at the centre, and listening along while you hold the cover art like a hardback book.
Scribed at 4:48 pm 1 comment: