Over on Phil's blog, I called Bitcoin a "programmable currency".

I have no idea what I actually mean by that, but much like the "exmosis" moniker, I get the feeling it's something important. Sometimes the words get ahead of their own meaning.

Originally I guess I meant "programmable currency" to refer to a value-medium (like any currency or asset) that was easily scriptable - for example, a bedroom coder can easily shunt huge numbers around with the right JSON calls.

No need for institutions to validate. No 3-day waiting times. No fecking Verified-By-Visa splash screens.

That's huge. We're starting to see meta-currencies, sibling-currencies, and other "spin offs" from Bitcoins, but which are transferrable, synonymous, backed by them. Witcoin converts Bitcoins into a unit for forum-activity. Bitbills convert Bitcoins into a "physical" form through hidden QR codes.

At the other end of the scale, the value-generation part, Bitcoin-mining is now distributable via Javascript on your website. To catch-up, the supply of Bitcoins is determined by cracking crypto - stronger crypto means less new currency incoming.

Typically, this has meant people rent server farms, or upgrade their GPU to get more processing power. But recently we've seen people pooling together to share not just their resources, but profits from this "mining" activity. Just like Lottery syndicates.

This Javascript implementation is another step towards along the road to a new kind of network. Not a "democratisation" of economics, but a system based on the distribution and availability of computation and efficiency.

I won't call this a "networked economy" - influence and power are always network based. Just the network is shifting from those with enough resources and impetus to wield influence, to something else. Here, the network is based on TCP/IP rather than on "schmoozing". Here, the content is algorithmic power, rather than rhetoric and persuasion.

(A sidenote: Brute CPU power alone is not what Bitcoin is based on - there are plenty of software/hardware-level optimisations one can do to increase computational power. Quality cracking, as well as quantity.)

But it does store value, and you can transfer it between people. That's good enough.

And I can write a script to do it. A bash script. A javascript. A Twitterbot. I can run that anywhere.

Remember when you first got e-mail? That crazy notion that you could basically do what the postal system did: send a letter anywhere in the world, but for free? With a single, universal address?

Use pwned systems, by all means. But a) never give out anything you don't mind losing control of, and b) always keep a back-up of what's important to you.

Phil's trying to think of something interesting to say about Osama (with some great results) - and I'm inclined to struggle in the same way.

My initial reaction is kind of a "so what?" - terrorism isn't down to one big bad boss, as Hollywood or computer games might have you believe. The urge to pin extreme acts on one guy, or even one group (or brand?) may make for good storytelling/news headlines, but doesn't translate very well into policy.

In fact, is "Terrorism" itself a handy scapegoat, positioned right down the other, most abstracted end of the scale? A scale that focuses on the forces of Good overcoming a single Evil - whether that's a person, an organisation, or a linguistic term. Are we destined to portray things as a fight against both a 1984/Bond-style individual with bad facial hair AND an indefinable, uncatchable mode of ethics? What do we gain by setting ourselves this paradox? What do we lose?

More disconcerting is the notion that Osama was driven (at least publicly) by cultural, economic and social ideas. His rhetoric was to tackle the West's "progressiveness" - a vague term that means different things to different people. But underneath this subjectivity, what can we really say about Osama's actions? Was he an independent, "evil genius" terrorist, or was he riding a more fundamental system of the global power struggle?

To cut to the Chase: Is "new war" the continuation of "new politics" by other means?

Waging war by attacking symbols of wealth? Use of violence - unsanctioned, yet justified by the actor - as a symbol, in itself, of protest and a threat for change? The disatisfaction with "big" politics decided by some very influential minorities with some very vested interests? Do these all come down to a system of networks (the how) and symbolism (the what)?

Isn't this what's playing out in Egypt? In Syria? In London? When the threat of violence is eradicated through preventative force, how far away is the progression from terrorism to pure destruction - or at least to violence purely to show control is not all one-sided? When does the *threat* give way to a non-stop series of televised attacks?

How we approach the figure of Osama (that is, his image, his reputation and his propaganda, all seen through a Western media lens) speaks volumes about how we approach any form of modern dissent, and how we portray forces of disagreement not thoroughly proscribed in advance.

The narrative of separation, criminality, outsideness, and ultimately the causes of violence itself, will define the next century - and how "politics" will continue to manifest.

Building a model city in 180 days

Sad to see Rob Simpson's MyCity model build project come to an end, although I can see why he'd want to stop.

I've been watching the model slowly grow for the last few months - something about it is entrancing. I'm not sure if it's watching something usually so large and organic grow beneath our eyes, or if it's the ghostly white texture pervading the scene. But this has been great fun to watch.

Hope he displays it somewhere. 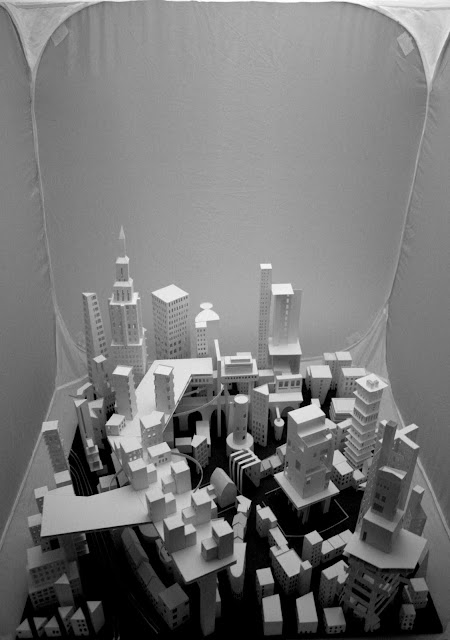 Just posted something on Witcoin that I was originally going to blog, so here's a link instead.

Can we sell more stuff based on the idea that the tiger is dying out and that land is at a premium, than we can if both were rife and sustained?

Or, like currency and BTCs, is everything given a value somewhere in between "un-usefully rare" and "un-usefully common"?

Wish I had more time to think it through - more thoughts welcomed.
Scribed at 2:54 pm No comments: