This article grabs the headlines by saying Bitcoin is not anonymous - which was kind of obvious really - but is actually fascinating for its network analysis and diagrams for the recent Bitcoin heist: 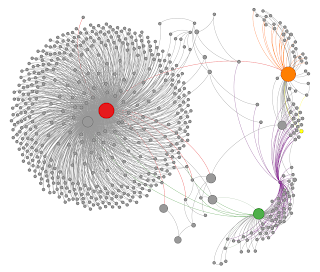 (via @DoTheGreenThing)
Scribed at 2:53 pm No comments:

Sir John Beddington's message on climate change, and how events outside the UK will affect us in the UK, is an interesting read for the language it uses.

For a start, it appears to accept that climate change is inevitable, and that adapting to it is more important than "preventing" it. Have we reached the tipping point not in terms of scientific effect, but of moral mastery? Is this a sign of a reality that has failed to deal with an unseeable threat?

Perhaps this ties in with a second observation - that climate change is indeed still seen as an "external threat" which acts upon us like an invading enemy. That we are "vulnerable" to it, rather than it is merely an effect of our actions. That we must "tackle" it, rather than change anything about what we think already. Like a good horror story, it is only too late that we finally wake up and realise that the problem is nothing to do with the outside, but was inside our very noses all this time.

Finally, the solution wheeled out comes down to money and markets - yup, if there's a solution out there, we should be the ones to profit from it. The idea that technological innovation will not only a) save the world, but also b) get everyone to give us money for doing so is like something out of any good sci-fi story with a Jesus complex.

The split between "us" and "them" is no longer of use. There is no "outside" or "inside" the UK - ideas, money, harmful gases and luxury goods now flow freely around the planet. Our society is connected, but the political mechanisms we try to find solutions with are anything but.
Scribed at 2:27 pm No comments:

How to stop thinking about the recession

This Guardian piece sums up the state of the UK economy for me. We have no plan not just for growth, but for sustainability either. It's questionable whether we need the former, but without the latter, we're pretty screwed.

It's becoming clear that we're about to hit a period where we've run out of strategy, which in practical terms means that we've run out of status quo opportunity: those who have resources will be fine. Those who do not will suffer.

At least, that's how it will play out for those who follow the "rules". In harsh times, a competitive system will be anything but fair or level - something I kind of figured out a long time ago. Resources will breed resources. Money will breed money.

The upside - and this is essential to understand - is that power is no longer limited to money. The old resources have been augmented and shifted - subtly, but subtly enough for it to matter.

In the coming hard times, those who follow money as the competitive decider will lose out to whoever has more. This is similar to tai chi, which starts out by saying that those who rely on strength will lose once they meet a stronger force. This is an unsustainable, unbalanced, unwinnable system.

The real way to "win" is not to compete, but to connect - to utilise networks, knowledge, creativity and sharing as a new form of power.

This is why sustainability is more important than growth. Growth is an outcome, not a goal. To grow, we need to focus on nurturing ourselves - as a whole, as a system - rather than competing with others. If we compete, there can only be one winner. If we share, we return to a future that has meaning, promise, and variable growth as and when.

The real divide is not between the haves vs the have-nots - if you think this, you're in the wrong mindset. We all have, and we all don't have.

The real divide is between those who want to connect, and those who will carry on fighting.
Scribed at 7:27 pm No comments: