I enjoyed reading Christy Wampole's The Essayification of Everything. It felt affirmative in a "idle musing is positive" way - too often I end up writing blog posts that ramble on, and abandon them when I feel I've not made the point I set out to make originally. But Wampole puts forward a history and case for writing as meditation, and self-interrogation, and ultimately perhaps, a non-rational exercise. A defragmentation of the mind. A surrealist pursuit, even when the output makes perfect sense.


When I say “essay,” I mean short nonfiction prose with a meditative subject at its center and a tendency away from certitude. Much of the writing encountered today that is labeled as “essay” or “essay-like” is anything but.


These texts are not attempts; they are obstinacies. They are fortresses. Leaving the reader uninvited to this textual engagement, the writer makes it clear he or she would rather drink alone.


The essayist is interested in thinking about himself thinking about things. We believe our opinions on everything from politics to pizza parlors to be of great import.


Without the meditative aspect, essayism tends toward empty egotism and an unwillingness or incapacity to commit, a timid deferral of the moment of choice. Our often unreflective quickness means that little time is spent interrogating things we’ve touched upon. The experiences are simply had and then abandoned.


Once again, I've been thinking about (re)surrecting the Empty Tech meme. I'd like a kind of on-going series of reflections, fitting in between overly-masculine argument and idle blogging. Maybe the Leanpub model of re-iterative publishing would fit well into a "cumulative" essayist approach?

Why are we so passionate about our tea and cakes in Britain? Some recent tweets have verged on the edge of zealotry, and led me to jokingly suggest cake as the next grass-roots currency.


But what if I wasn’t joking? Or rather, why has cake succeeded in capturing the hearts and bellies of communities where alternative and supportive economies have failed? I set out to turn cake into a gooey financial bake-off. Possibly with semi-soggy results - but then I'm neither a banker nor a baker. 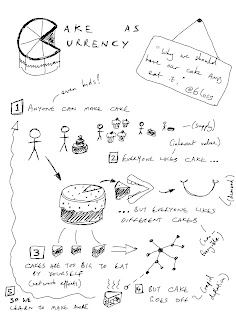 l. Anyone can make cake

...or at least try to make it. The lady downstairs from me, who half-inspired this post, can apparently make eight cakes in a day. Eight?! It generally takes me a couple of weeks just to work out what I need to buy for a Victoria Sponge. But we can both make cakes. We cannot both create money. Baking makes us equal, but some bakers are more equal than others.

Unlike traditional fiat money, cake definitely has an inherent value of its own, ie, it's yummy.

Too many "local" currencies are concerned with building a more restrictive version of mainstream money without providing a real incentive to switch to them.

Cake gets around this problem by being yummy, and therefore desirable. But at the same time, not all cake is yummy to all people. Coconut cake, for example, can be a deal-breaker. Within cake, there is variety, and this variety leads to a form of network-dependent semi-fungibility - that is, the value of your cake becomes relative to who you know.

This is vital to remember when trying to encourage a diverse (and therefore resilient) group: "a good selection of cakes is a must."

(One can imagine tastes within a group converging and emerging over time-an evolutionary model of local cake currency, maybe. Let the coconut wars commence.)


3. Cakes are too big to eat by yourself

There are stories of cakes being eaten entirely by a single person - but even then, such a feat is often seen as a punishment rather than a reward (see, for instance, Bruce Bogtrotter in Dahl's Matilda).

Cakes are inherently a currency for the networked community, one which values and thrives on sharing instead of hoarding. Each cake represents a collective memory, a group taste preceding groupthink. And the extent of that network depends only on the effectively-infinitely divisible nature of the cake. Even one "crumb" (once thought of as the smallest unit of cake possible) has been seen to be chopped and chopped, in a vain tempt to avoid the social stigma of being "the finisher".

Indeed, the cake and the network are one and the same.

The world is riddled with looming economic questions. As production fails to kickstart, lower and lower interest rates have been offered, to the inevitable point of major institutions mulling negative rates. Bitcoin, an emerging digital money, is built on a deflationary model over many years.

But cake beats them all, with rapidly-deflationary value - a couple of days at best, maybe a week of you're lucky/careful. Cake demands to be either eaten or given away now. Like a mayfly, it must go all out to attract someone, its soul mate, in order to fulfil its very-raison d'etre. "Time and cake wait for no man."

This is absolutely vital. Weak connections (which cake runs through, cementing as it goes) are unstable and uncertain, but there's a good chance you may re-encounter a fellow caker not immediately, but in a week, a fortnight, or a month.

This limited but definite gap in time - not instant, not eternal - is where cake comes in. You have enough time to eat the cake, and you still remember it next time you meet someone again. As cake expires, it becomes a short-term memory, and short-term memories are what bind weak connections together.

Either way, no more cake.

But we want more. We have fallen in love not with cake, but with the very essence, the "Network Cake". We have been drawn into #bigcakesociety.

And so we become inspired. We flick through cooking books, buy utensils, we ask so-and-so for their recipes, and so on. We become bakers where we would never want bankers to tread.

And the cycle of cakonomics begins again. A fresh round of flavours and memories is introduced to the network. More tea is made. Words come out of our mouths and into others' ears. People listen and
understand. Choices are made. Action happens.

"Meat-related offences" is my phrase of the decade.
Scribed at 3:14 pm No comments: