As the tendrils of the NSA continue their silent attempt at infiltration, it's a whirlwind to understand exactly what the fall-out of Snowden's "revelations" are. I can see myself flitting between and falling into 3 different responses, each of which may be just as dangerously fallacious as each other:

1. Carry on as normal. Normal people don't care about all this. They just want to share photos and comment on each other's kids. Nothing to hide, etc. I'm still blogging via Google's blogger.com, aren't I?

2. Shrug and say "told you so". As a self-labelled, semi-practicing cypherpunk it's tempting to think you were working on the assumption that everything is surveilled anyway. Paranoia is the best form of defence. Be careful about what you leak.

3. Get outraged. I was right - but it's even worse than I thought! Cypherpunk efforts need to be redoubled. Everything needs to be self-hosted, resilient, and strongly-protected. Just in case. Be angry, be very angry, that there are a bunch of people who think they own you.

In fact, simply falling into one - or any - of these is a mistake. Why? Because they all follow the same model - the idea that state security is at one extreme, and everyday users (using commercial services) are at the other. That there is a difference, a very thick line, between the worlds of global security and funny cats.

This is an outdated model based on antique technology. It is a steampunk model - romantic, but useless in reality. The world has changed too much.

The reality is this: we are in an era of economic power struggles. Right now, a lot of people are desperate to keep control of the world. And this entails maintaining a population happy to exist in an economic-power mindset to support this - people that fit into a specific notion of how economics should work, and how "value" should be transferred.

The very notion that you are at the "bottom" or the "middle" or the "top" of society. That you fit into a class that has ever finer degrees of hierarchical granularity. That as you grow, you move upwards. All of this is essential to producing that economic-power model.

There is no "hierarchy" that you can make progress against, only a mesh of platforms and power within which you live your life. All those forces acting on you are there deliberately. Every time you wish you could afford something. Every time you get angry something goes wrong.

We can't think about global security in a James Bond way any more because 'spying' is now so integrally woven into the fabric of what we do, from CCTV cameras to rubbish bins, from search engines to loyalty cards. "Prosperity" is in the early, yet all-encompassing, stages of depending on this inherent level of surveillance to survive. The economic power model would be "inefficient" without it.

This is the fundamental paradigm shift we - as individuals, but also as communities, as companies, as organisations, as families - will struggle to understand, partly because we're not used to it, partly because it changes all the time, and partly just because we don't want to think about it. It's confusing and scary and unromantic.

It will affect whether you smile.

I wish democracy could find a way of circumventing this level of invasiveness, but I doubt "democracy" is a thing in itself any more. In our romantic view of the world, democracy is set apart from Politics, a lone bastion of philosophical standing. In reality, all we have is a handful of lack-lustre parties, an antiquated voting system, and insufficient openness or effort for anything to be truly influenced. Democracy is dead.

I'm not sure what's left in its place. Reality, perhaps. The idea that we don't really need any of these networks after all - we got sucked into them because we thought they were safe, convenient, somehow better. But maybe we just didn't think that one through.

Maybe it's time to do less. Care less about the stuff we thought we cared about. Stick two fingers up at things like "entertainment" and "pineapples". Ignore Instagram. Find stuff just by asking about. Do some weeding on a massive scale.

Can the UK domain censor scheme be hijacked?

Oh God - TorrentFreak has been accidentally blocked by Sky - probably due to their IP being listed in a blacklisted domain. As comments in the article point out, this is a massive opportunity loophole in how the system works. If this is how it works, all it would take is for a blocked domain to point themselves at whatever IP they want and any websites hosted there would fall off the net.

If it works like that, I'd thoroughly expect this to hit in the next week - over the weekend even, when everyone's catching up with news and email. I'm guessing the ISPs have some kind of whitelist in place though, which trawls "big" sites and auto-adds them. Guessing.

Ongoing. The question - if I map out everything I use, what it depends on, and what it hooks up to, does it make it easier to modularise, and to see what the priorities are? Maybe up/down are links, left/right are forms of resilience. By exploding them into parts, can we create links between them that didn't exist previously?

Could the same be done with larger infrastructures (without descending into self-destructive Politics - why would you tie a single pot of funding and a single organisational structure across all modules? Can Local Authorities and "generic" branded movements really survive?) 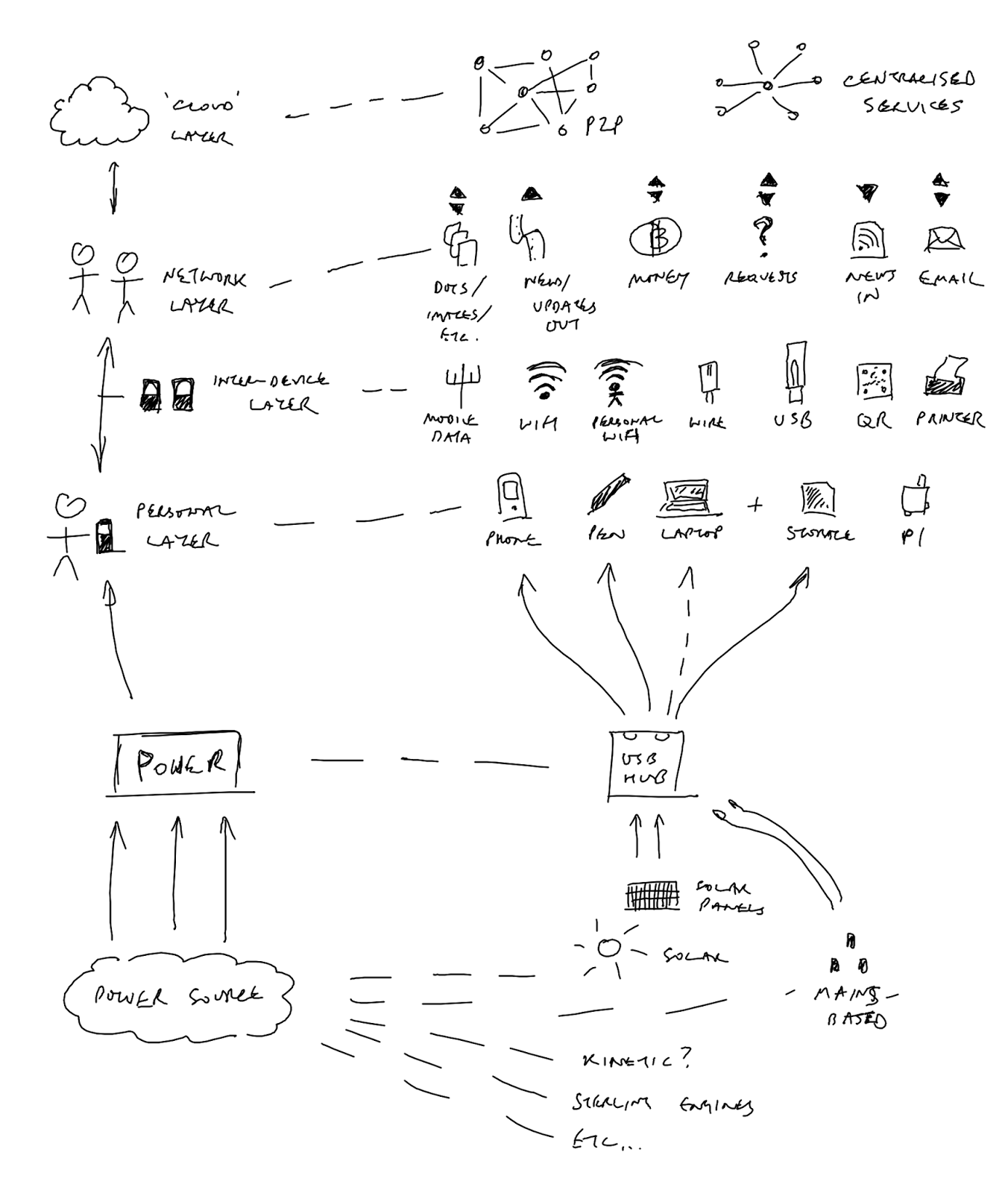 I didn't realise that this blog was 10 years old last month. I'm not really sure what to make of my early posts. It was a different time. I blogged a lot more. And most of the links are broken now.

Still thinking about house prices though.
Scribed at 7:46 am 1 comment:

Something mysteriously, spookily entrancing about the rrrrrrrroll animated gif tumblr. Something about the way you know they will carry on going round and round forever even after you close your laptop and the internet has hit binary death.
Scribed at 10:06 pm No comments:

Over on the bitcointalk forums, people are (semi-seriously) talking about buying up run-down houses in Detroit. It's a no-goer, natch, but among $30 houses and tax discussion, some of the ideas and links provided in the thread really hit home. Right now, Detroit seems to be as close to a 'raw', skeletal leftover of a city as you can get.

For instance, this link runs through some crazy facts about Detroit. Around 50% illiteracy rates. 60% of children in poverty. And $11m a month comes to the city from casinos. It's gone all Bladerunner - anyone who can afford to get out has done.

What's amazing is how the decline and death of an urban centre differs in Modern World - it's not like cities haven't always come and gone as external factors force major shifts. But has the nature in which that death is dragged out fundamentally altered? There might be a certain "evolutionary" side to towns and cities flailing as there natural strengths no longer have any grip. But as financial manoeuvring has become the global business "model", the link between strengths and survival is becoming less and less clear.

Too many looking glasses, all being seen through dimly, so that one is never quite sure what's glass and what's the subject.

Looking through a list of other cities which could fall, and some which already have, should we be seriously reconsidering the role of cities? As more of the world's population flocks to the intense networking available in squeezed urban life, is there a need to seriously pick apart the physical, social, and economic building blocks that are currently muddied together under single administrations? What form of resilience do we have if living standards are so tightly coupled to financial vehicles? What will our cities look like in 30 years' time if infrastructure has to compete with shifting demographics?
Scribed at 8:47 am No comments:

Yay for global warming.
Scribed at 9:42 pm No comments:

The art of weeding

It hasn't had much traffic, but 'The yin and yang of weeding' is possibly one of the most important blog posts I've ever written.