Pictorial Notes from a Museum

Brighton Museum & Art Gallery has been a staple visiting point for years. When my son was born, it offered free entertainment, changing facilities, and a cafe. It's still a great place to wander round. These days I pay more attention to the small detail though - there's some fascinating stuff there. 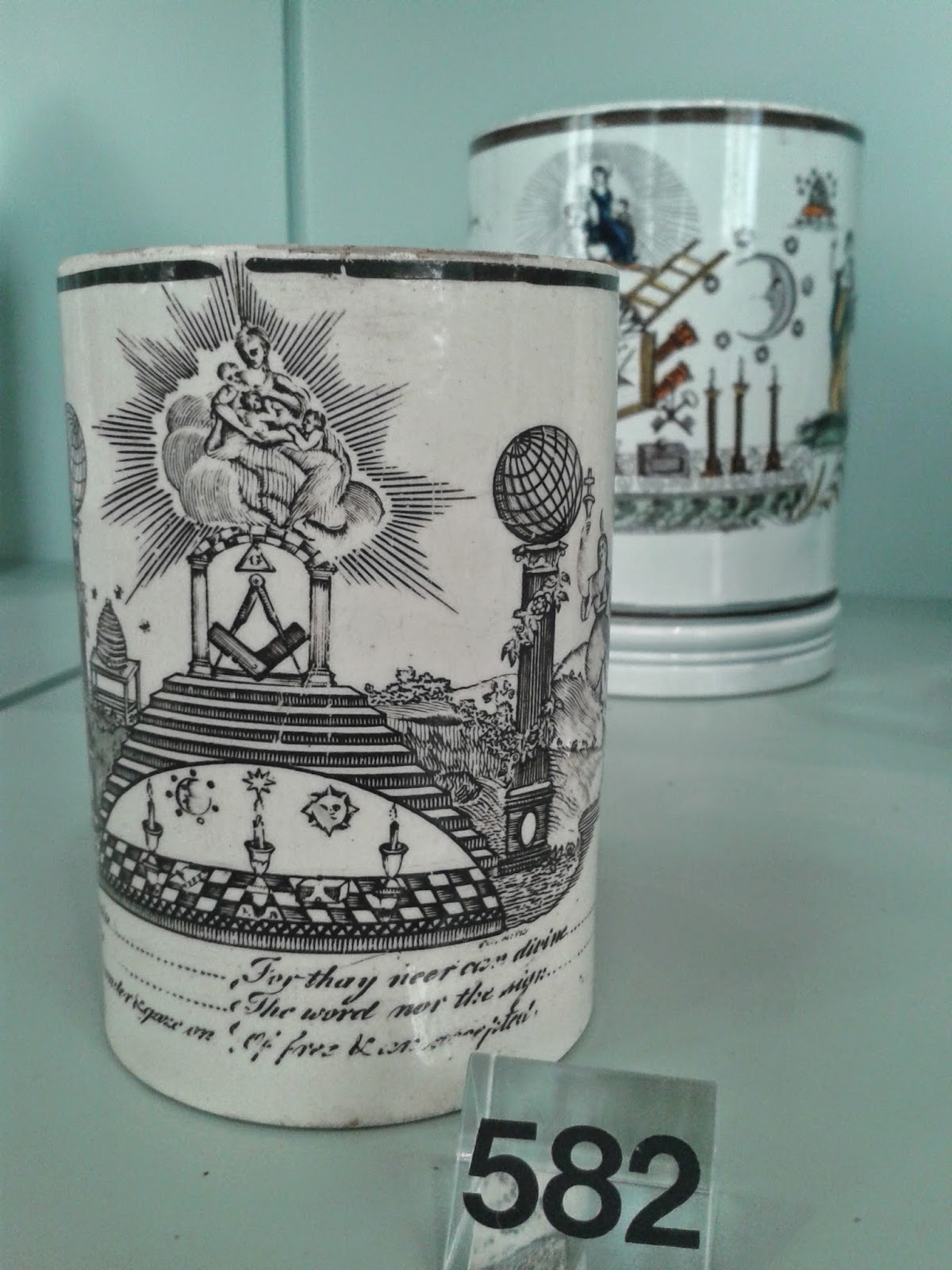 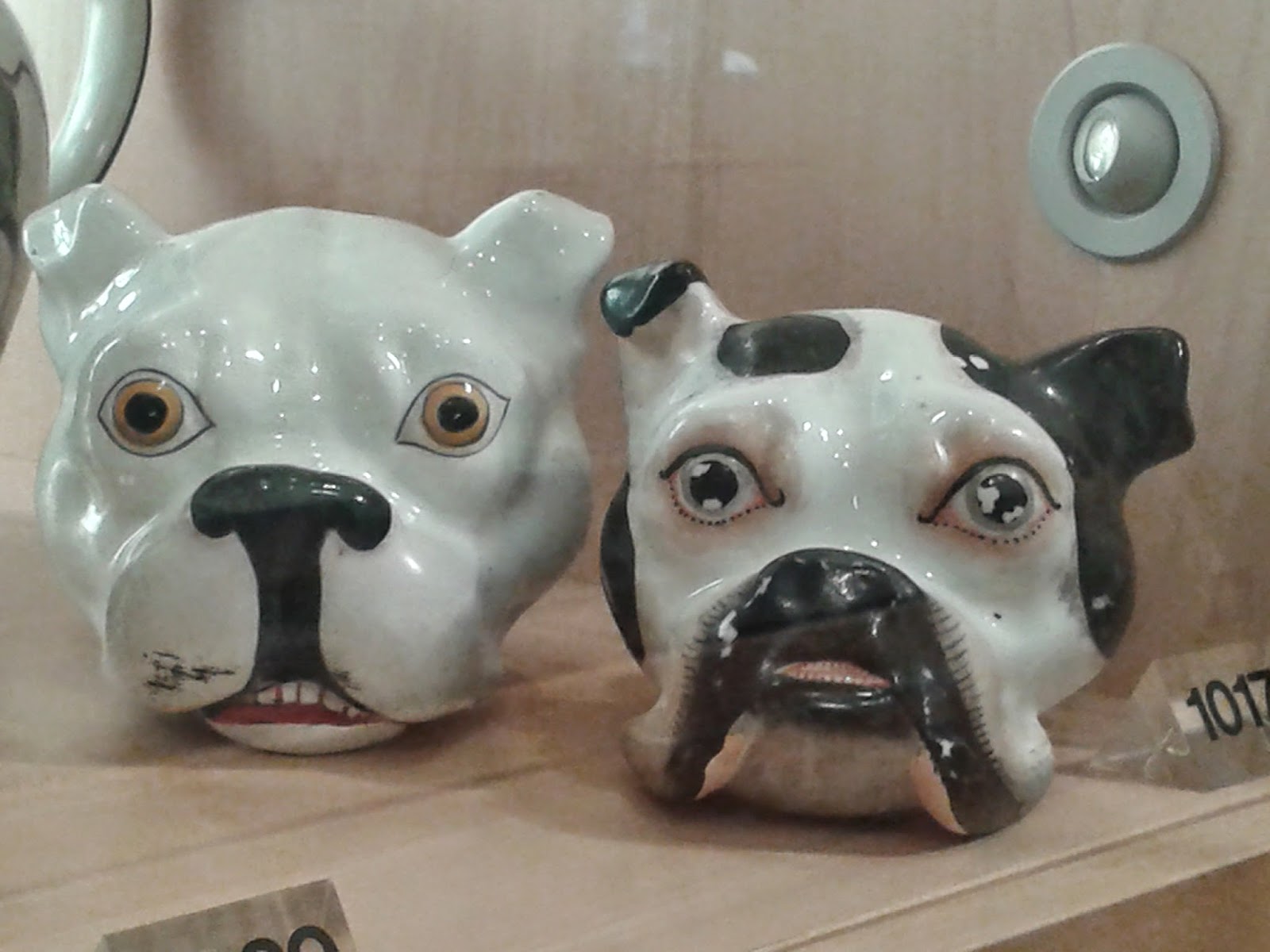 A jug celebrating the guillotine. "View of LA GUILLOTINE or the modern beheading machine at PARIS by which LOUIS XVI late king of France suffered on the Scaffold Jan 21 1793". 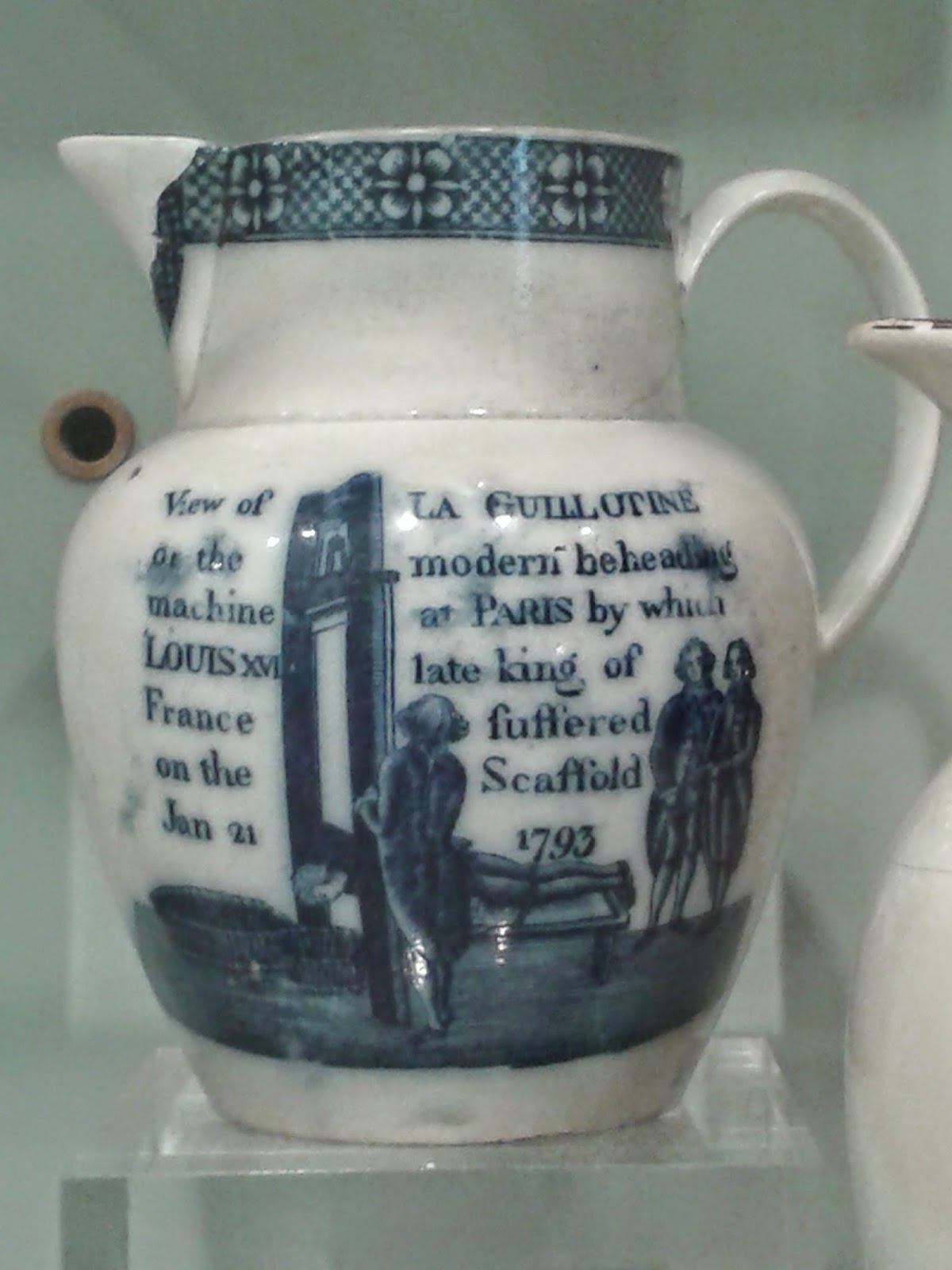 I couldn't get a good picture of the chamber pot with Napoleon's head in, so here's a better version taken from Peter Kenny's blogpost: 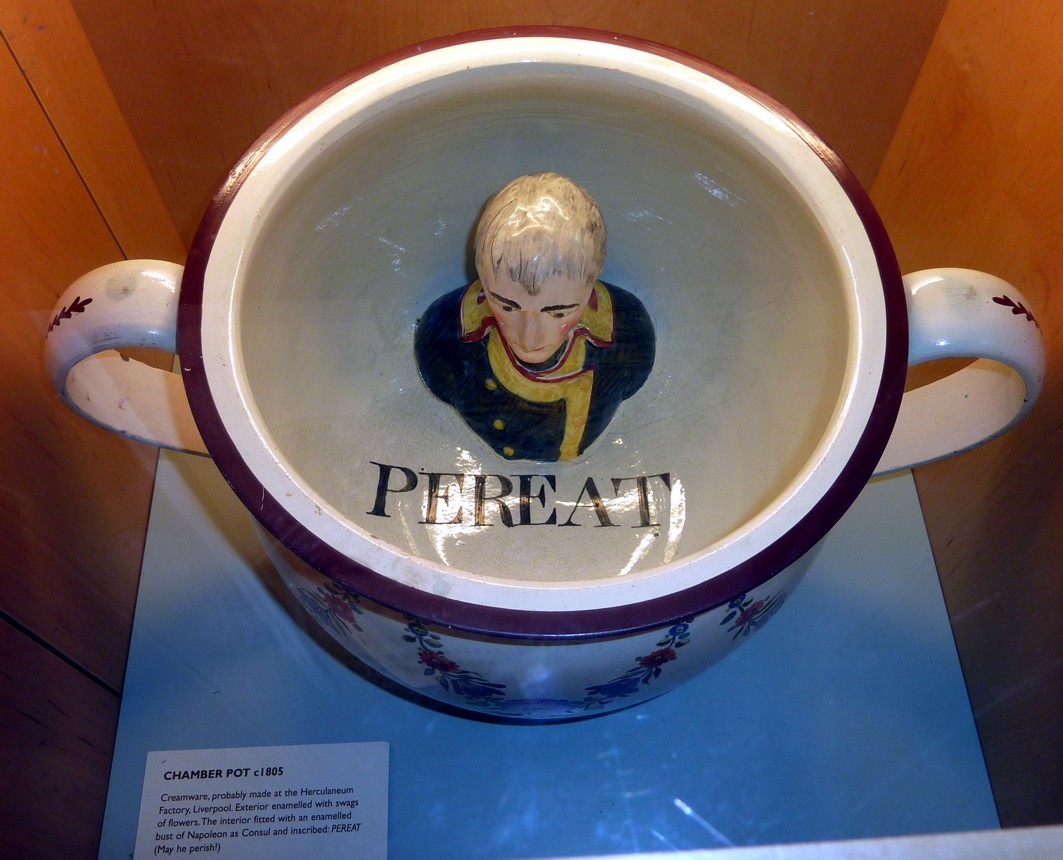 Scribed at 9:18 am No comments: Links to this post

Labels: brighton, brighton museum, but is it art?

The Cyberfootprints of Autonomous Identities

"Digital Nomads" are defined, it seems, as people that use a mixture of lightweight hardware and connected software to be free to travel, yet carry on doing what they want to do.

You could say it's inevitable as the physical world gets more crowded - "work" doesn't have to be done in the same physical space as co-workers (or at least the cons now outweigh the benefits); we aren't tied to really-specific locations to send/receive comms (the rise of the personal device saw to that); and, TBH, software-dependent working (anything that can be done digitally) just has significantly lower barriers to entry than other "traditional" hardware-based jobs.

Software is a platform of its own, and it's got unlimited space.

But what if we take the Nomadic idea further? Simply shifting everything from meatspace into cloudspace, and relying on technology to get smaller and lighter, isn't nomadicism - it's just more of the same but in a virtual way. We still accrue stuff, we still depend on the infrastructures (everything from wifi standards to cloud services) that permit us to relocate our corporeal selves. Are we really any more "free"?

Part 2: Carry your own advertising space

This giant truck vehicle has been hanging around Brighton recently. Here it is, ironically parked outside "Mobile Pitstop": 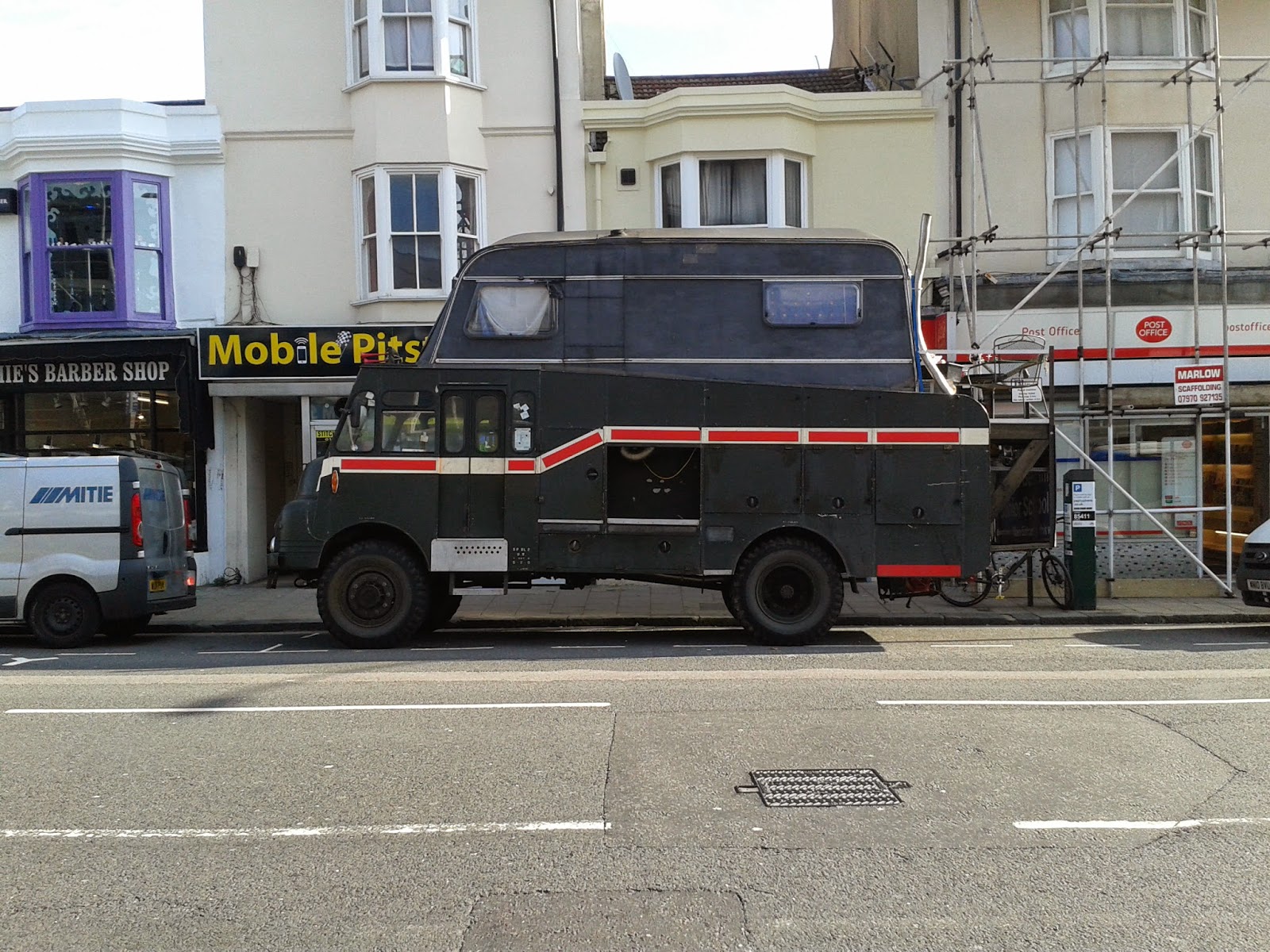 There's a giant blackboard on the back of it (beneath the balcony where the driver guy has his breakfast). The owner chalks up stuff he wants, and stuff he wants to get rid of. When I saw it, he was looking for mixed fuel, and deep tissue massages. He had nothing to offer.

The vehicle itself is pretty amazing - nuff said. But the blackboard really got me. Once your environment becomes your home and your constant transport, your breakfast bar as well as your identity to the outside world, 1) what do you want your vehicle to "say", and 2) once you've got people's attention, how you can exploit that? Part branding, part attention economy.

Unlike the online world where we'd find a place - a virtual bazaar or noticeboard - to pin up a message, and hope enough people were scanning to see it, this guy is his own notice board. It's a "pull board", entirely self-mediated, entirely self-interested, entirely absorbed into the rest of his existence.

(Also, blackboards aren't limited to specific functions. If he wanted to draw a crazy-arsed giant robot on it, what would stop him?)

Over at Empty Technology, I've started building up a "Nomad Infrastructures" section - I've posted my own initial thoughts here, coming out of earlier thoughts on modular personal infrastructures.

For me, this is a way to explore the impact that our hardware and software use have on our dependencies. That is, how much functionality do we need, how much do we want, and how much do we just use because we feel we should - all with an eye on how much power and effort we expend on each of these. The end goal is to feel free-er and more in control of our own movements, by realising what is essential  our own priorities are.

A lot of this question comes down to two things, perhaps: 1) what we decide we don't want to get rid of, and 2) systemic synchronicity - mutual efficiencies - between things that we do. For instance, maybe I can get take advantage of my travels by offering some kind of delivery service between places I frequent - offering a delivery service by itself doesn't make much sense, but a service that's convenient to me is an opportunity. Extra effort vs extra gain.

Deciding what you want is one thing. Deciding what you need to do it is another. Making it attractive is yet another again. (Mental note: Maybe we can map this to the self, the tools, and the other?) But there is a difference between dependency and opportunity. Helping people out, or being helped, becomes a voluntary act of kindness, rather than a reliance on charity.

Part 4: Towards your avatar's footprint

I tried long and hard to think up a catchy name for summing up an approach to minimising and controlling our data online and off - digital detachment, digital simplicity, etc etc. But TBH I just gave up. It's not a movement in itself, it's just a way of seeing. "Inbox Zero" has become a Thing, which is all well and good, but it specifies an outcome, not a rationale.

The closest I got to a Thing was to think of it as a "footprint" - in the same way that people talk about carbon footprints and, uh, that's about it really. A data footprint, the impression(s) we leave behind us. (It's not quite right. Footprints don't get used and mashed up or have any notion of "now" or ownership. But really, I gave up thinking about names at this point.)

But who's footprint is it? Is it ours, or does it belong to the online version of us?

No, rewind. Why are we so intent on leaving footprints behind us forever anyway? Why does my Facebook Timeline go all the way back to my birth? (Last time I checked. I'm not on there a whole lot.) Why is deleting your profile such a big deal?

So to return to the question about whose footprint we're talking about. Why do we choose to put out what we put out? Or to keep what we keep? Why is this photo better to post than that photo? Why do you "like" (in a Facebook-type way) this comment but not that comment?

Why did the guy in the huge vehicle paint it all black?

Each space we push data into becomes a fragment of our online identity, a particular facet of our global avatar - except it's an avatar that replaces its face with our choice of words, and its limbs with memes. We become constantly engaged in building this persona, whether we like it or not.

When someone visits one of these facets, one of our "outlets", it forms an image. It is accepted practice, now, that these images are there to be "followed", to be popular. The facets and images get given their own email addresses, homepages, plus signs (whatever would +ORQ have thought?) and are worth billions of dollars. We craft them like the tools that store them.

Each image exists by itself, somewhere out in cloudspace, ready to be dug up and made to perform on request. They are autonomous identities, golems we create to hold our place while we go and check on our other golems. This blog is a golem. It hosts words, wraps them in fabrics, and holds messages for me while I'm away. Leave one now after the beep and I may get back to you.

But the golems can only do so much - they are limited by the space they are created in. So we create ever more spaces. Ever more golems.

Part 6: Your faith in your friends is yours.

There's nothing wrong with any of this, of course. Empty Technology is not about right or wrong. But it is about control - keeping control over your own golems, to avoid them taking on the commands of others. It's also about simplicity, to avoid all those images taking over from the real thing.

How much is "too much", and how much control you want to swap for dependency - these are questions only you can answer.

Scribed at 10:24 pm No comments: Links to this post

Labels: #nomadic, advertising, empty tech, i have enough thank you, identity, infrastructure, memories are more real than life, personal infrastructure, re-connecting, where is my web these days?

Scribed at 4:25 pm No comments: Links to this post