One day we will see photos taken by starving children as well. When we see those images, we’ll see photos that show how they see the world. We’ll see them as individuals and not simply as symbols of Hunger, Need and Despair.

As the net becomes ever more natural, I wonder if we become less or more sensitive to the symbols around us. I suspect we see them for what they are more, but care less.
Scribed at 2:11 pm No comments:

How retro-wire symbolics set us up the bomb?

I'm fascinated by the picture of Ahmed Mohamed's homemade clock which school thought was a bomb: 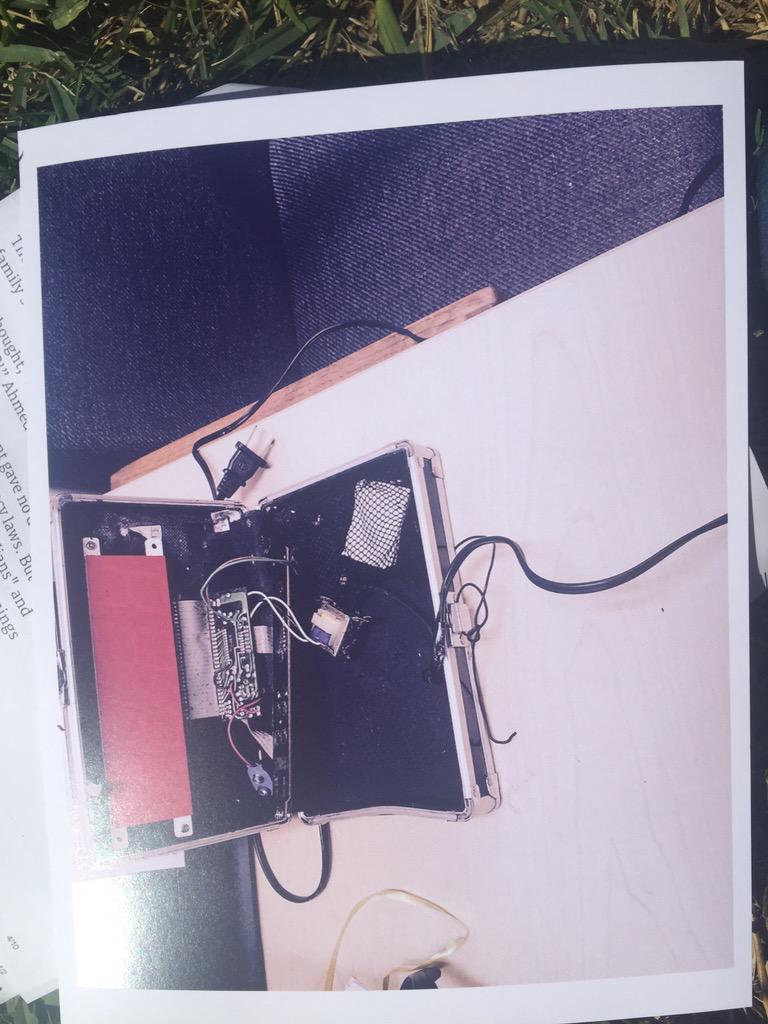 In other words, the homemade circuit has become, it seems, the symbol of bomb-making.
Through so many Hollywood films, tabloid descriptions, daft kids' programmes and feared imaginations, the only possible use left of basic electricity is for nefarious purposes. Displaced by high-powered, subatomic electrical circuits on the one hand, and simulated electronics such as Minecraft (and other forms of coding?) on the other, wires and the visible circuit are now an antiquity, a foreign concept.

The "rational consumer", devoid of physics, can only imagine 3 rationales:

1. Child has made a bomb.
2. Child is practising skills to make a bomb.
3. Child is messing randomly with electricity, which is dangerous anyway, and more importantly a bit weird.

In any case, there is something here worth investigating. And if anything needs investigating, it must be done in an ironically controlled fashion. The inspection of both the child (under detention and handcuffs) and the device (through seizure) has the same roots as debugging the electric circuit in question - keep elements in isolation, connect only what must be connected, preserve a sense of experimental caution.

For anyone of a hacker mindset, this reaction is neither new nor surprising. It is still deeply depressing - the notion that the world can be wonderful and beautiful, and yet others are so unable to see it.

There is still no mainstream option 4 - the child is capable of discovery and creation. This is left to hackers and presidents.
Scribed at 9:14 am No comments:

A collection of long photos

As a photographer, it's hard to be disinterested in the world around you. While a photo may involve a single shutter firing, a single moment when instinct kicks off a snapped finger twitch, everything in photography is about observing and monitoring the world leading up to that moment. It's meditation, but with a goal, an output, a memory to take home.

Recently I've noticed more photo-like videos cropping up - longer, balanced takes that seem to reflect this pre-final, penultimate moment. I wonder if it's a backlash against the oversaturation of traditionally static images, or the frenetic nature of the MTV-age, attention-economy video edit style, or even against the bombardment of activity and stimulation we face every time we wake up. Whichever, or whatever combination, where do slow videos/long photos fit in with our lives and our loves?

Some examples of this movement that have stuck in my head over time and more recently:

For anyone even vaguely caught up in the mechanics of modern, networked life, choosing to spend time sitting still and watching something with little "obvious" interest is a hard-placed decision. Which makes it more interesting, of course.

I'm aware video online is massively popular. People choose to watch videos, but without descending into another post here, I'd argue there is a big distinction between "entertainment" videos that provide a reason to watch, and the long photos, which perhaps simply capture a single view/element/concept, and explore it using some notion of time, beyond the single-frame limit of still photography.

I'm playing with putting Bookmore's postcards on as background accompaniment at work, like playing back cafe hubbub or car noise to soothe a baby. Full-screen on a second monitor turns it into an interesting window into another world. There’s something going on, but it’s not “interesting" enough to distract me. Sometimes people put a favourite film on for casual accompaniment, rather than to watch it, and it feels a little like that.

In terms of content and profit, it sucks for modern day attention industries. But in terms of life, maybe this is something I could get into.
Scribed at 8:38 pm No comments: