Choose your own (activist) adventure

(Skirmish thoughts, an attack on my own thinking.)

For some reason there are many chaoses these days. It is hard to know where to start, even when just waking up. The news feeds drag in contempt and despair from the media archipelagos, fresh and raw and bloody like limestone spikes.

I have spent a few years elsewhere. Childbirth and the silence of the tao. These are powerful tutors, they have entwined and entered me, and will be a part of me as much as I am of them from now on. But meanwhile, among the red first, the world is showing the cracks in the plaster and it feels like it's time to address something.

Where to start? Layers on layers - single issues, politics, democratic systems, global power. Technology stacks meet legal infrastructures meet opinion platforms. Everything moves so fast, the world has become a ghost that shimmers around any punches you can throw. One person can't fight an army of spirits.

I spend my time supporting others. But I figure I need to see through the smoke of the shadows somehow. Make a difference. But what difference to make? How does anyone decide?
Scribed at 9:59 pm No comments: 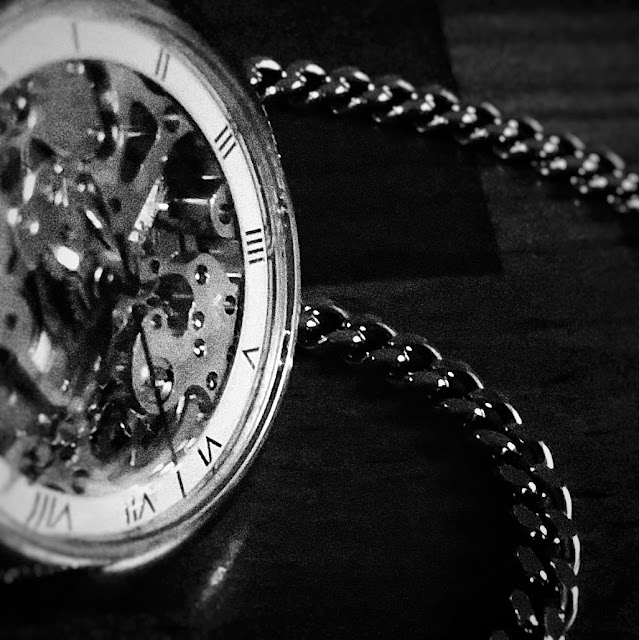 One of the antipodean effects of growing up with computers is a love of the analogue. Vinyl. Paper. Pens. 35mm film.


Last week was pretty stressful, or at least tiring. I decided I wanted a way to reflect and flag up my tiredness levels. I thought about mood rings - then I looked them up (never having had one before) and found they didn't work. Something else then.


Search for "mood jewellery". Same thing. "adjustable jewellery". Nah. I wanted something like a pendant, but I'm too shy to wear things externally. Something I can secrete in a pocket world much better. A personal sigil, hidden like jade.


The jewellery search threw up a few things though - cheap fitbit watches, and some other watches. Ambient feedback, right kind of area at least. I wasn't sure about an automated monitoring device though. Feedback is so... Personal. Plus, I've come to realise that half of the Art of Feedback is in the doing, not in the feedback itself. A manual process forces us to pay attention. So not a fitbit.


The search overlapped, chronologically, with the image of a pocket watch which had come up when thinking about steampunk style after the Eastbourne Steampunk Festival a few days earlier. Yeah, a pocket watch. A portable clock, but... not used for time. Stress lives like the threat of an explosion. North Korea and the Doomsday Clock made the silver link, invaded the arena. A stopped clock tells the time twice a day, especially if you set it. Yeah, a pocket watch I could set, to indicate to myself how close to implosion I am. On to something.


It happened that I actually had a stopped pocket watch. My wife bought me one years ago, before kids. At some point in its era, the tick-tock got jammed, and the pulsing heart stood still, pregnant and primed, yet blocked. I could still set the time though. I dug through my cupboard and pulled it out. Still stuck, excellent.


I tried it out on Monday - stuffed it in my left trouser pocket, replacing the jagged hills of my keys with the pocket watch's smooth circles and ruby pink gems. I ran through the week's tasks, and fiddled with the watch's hands. Mentally calibrating 12 o'clock as death, I started at 6 purely for its cultish symmetry. Up to 7, 8, 9 o'clock as the morning came flooding in.


At lunch, I pulled the watch out again. The morning had gone well, I moved the hands back down to 7.30. The silver finish captured and contained the tiny smile I let out, emerging from the emotions derived from a new tool, a successful morning, and the silver finish itself. The circular smoothness entertained and comforted me.


The next day I had to take son 1 to the doctor. We had wrangled a cancelled appointment, but had to divert from school, march up the hill and arrive in under 10 minutes.


It was on the way out of the surgery that I looked down and noticed the miracle - the watch was beating again. Its spring had unstuck, the tiny wheel bouncing back and forth like a genie fresh from the bottle. I was amazed, relieved and disappointed all at once. Real, analogue time. Jarring with my new sense of purpose. Now with each oscillation, I was apparently getting incrementally more stressed! I set the time and carried on.


Now I'm counting the days, the hours, until the energy in the spring dissipates, the jewel-studded mechanism winds down, time becomes static. And then, once again, I can find out how stressed I am.
Scribed at 6:59 pm No comments:

Into Steller: A brief history of social photo hosting

I'm posting this on Blogger, which is probably the "Web 2.0" site (ha, such a retro term) I've been (ab)using the longest, paying shareholders with my own content (or "data soul" as it's called now). According to my archive page, I started blogging here in July 2003, so there you are.

More recently, apparently some time in 2005, I started using Flickr, which was the multimedia ("photos") poster child back then, before Google bought YouTube and way before I'd crashed out of academia. It was a good time, full of experiments and the excitement of digital and the early nostalgia - pre-Instagram - of analogue re-discovery.

The last few years Flickr has gone the way of MySpace, in my eyes. The community is gone, and large corporates stand guard over the domain like the Collosi of Memnon. I know Internet history, the signs don't bode well. I've been trying to work out where to go next, what the next pin in the map is for data travelling through the cyber realms.

I should probably bring it home, self-host something, but ... photographer "community" is a weird one. Everyone takes photos, but not everyone takes photos. The Brighton Flickr community ran off enthusiasm, liberalism, and cafes. Flickr was a central part of that. The social scene doesn't quite click when it comes to self-hosting. In other words, I'd miss the hearts.

My own photography journey has also crossed a certain ocean. I'm no longer a "catch something intriguing", shoot from the hip, post-ech-frame-as-it-comes sort of guy. I'm hooked on the art of curation, the gentle sculpting of a narrative from images, like instruments in an orchestra. The narrative that speak from between the gaps in frames. The sound of a set of shots echoing around your brain, just behind the eye.

I've been playing with Steller a bit. It's ticking a good few boxes, although I still need to dig into the data usage terms a bit (yes, I'm that much of an adult). But it brings together the ability to weave a thread, jump between a scene and a sentence, feel the hearts again.

Here are my first three photo stories (via Javascript - load this blog post in a browser if you can't see them). What do you reckon?

Labels: a good story is one in which nothing happens, flickr, photo essay, photography
Newer Posts Older Posts Home
Subscribe to: Posts (Atom)