A quick pointer to zines...

Very excited to have had my first zine review over at Sea Green Zines - I then just realised that my exmosis.net domain doesn't link up very well to the stuff I sell, so if you're looking for zines, then my Etsy Shop is the place to find them.

Must actually update my website one of these days. I haven't changed it in over 10 years. 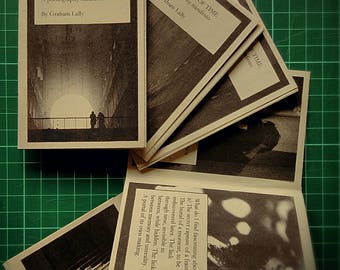 Nomadic identities and updated other places

I've been getting back into experimenting with homegrown and free tech networks recently - this week I finally signed up with SDF.org (heh, link died just as I wrote that...) and have been exploring. the original intent was to try out setting up a gopherspace/phlog, but will see how that goes in time. Meanwhile, as the last leaves drop to the rising puddles, it's nice to see a place with a sense of community, not just a thirst to suck in as many individual identities as possible in order to sell them stuff.

But it's left me feeling exploded again, not in a bad-or-good way, just in a way. I'm enjoying not feeling like there's "one true site" which you have to use. The whole "Facebook vs Twitter vs Snapchat vs Instagram vs etc" thing is such a sham, like the whole Britpop concoction back before most people were born. It's a trade-off invented by a capitalism, amplified by a media looking for a) a battle to cover, and b) lists of top tips they can trade to the unadventurous.

So I'm on Twitter, XMPP, Gnusocial a lot. I've updated my Find Me page to reflect this, and offer some more modern choices than tribe.net - have a look and subscribe to what you might like. Or use it an excuse to get into a new tech, a new network, expand the horizons, travel a bit. I don't care.

Of course, it still doesn't have everything. A man has to have some privacy...
Scribed at 9:58 pm No comments:

Money as the original AI?

A great ago, India basically cancelled a bunch of currency notes without warning. There's a good reflection on the year that followed which raises the question - is currency a force in and of itself? Does it use human social interaction as a medium by which to exist as a flow? Is it alive?


"India’s central bank, the RBI, recently reported that of the estimated 15.28 trillion rupees ($239 billion) in currency taken out of circulation by demonetization, almost 99% had been returned to the banking system."


Money has value, and people will take this and route it and liberate it as is useful to them, circumventing government if the need outweighs the risk. Is currency the original AI, a technology released without truly understanding the impact it would have on the people it brings together?
Scribed at 7:05 pm No comments:

Why Quantify the Self?

Just (finally) finished reading the fourth and final part of a series on the theory on the "Quantified Self". My brain is buzzing, as it peers into the cracks and shadows around personal "computing" (devices, but also increasingly identities, and associated data - or "dot joining"), global state-level agendas of economic progress ahead of anything else, and an apparent rise in the personal quest to be better at...

Better at what? In among all the hype and technology and excitement and innovation and hand-wringing and threat and celebration, what are we actually striving to be "better" at? And more fundamentally, why?

The last 40 years have seen a strange and confusing tide to move us (in the UK, at least) towards a paradoxical mix of individualism and social conformity. We have discovered a pride in our own selves, manifested through a series of status symbols: everything from cars to phones to breakfast cereals carries with it a socio-political connotation: If it doesn't indicate how rich you are, then it indicates what alternative definition of "success" you have.

On the other hand, we find ourselves clustering into diffuse tribes, enshrined not just through the fashionist symbols we accumulate, but now also through our echo chambers and filter bubbles that we gleefully set up online. Our identities are a mash-up of the branding and trademarks we subscribe to, and the hashtags and social services we affix to ourselves.

There's a lot of good thought on the internet these days, really. Too much for me to keep up with. But I find it's increasingly reactive, rather than reflexive. We seem hellbent on picking apart the latest malfeasance or easily-critical topic. We're news-obsessed, and it's not hard to see why: flicking through Twitter, I get attacked by trending topics and emailed with "Moments". Snapchat and Facebook are the same, in different guises. We've become trapped into thinking we need to keep up with all of the news. Why are we doing this?

Identity as a Container

If we assume that an "identity" is nothing to do with a real person (per se), but is first and foremost a container to establish a related set of dots, then what does the standard process look like?
Advertisers assume that the social grid you inhabit, combined with the metadata about you, effectively form a space within the wider, overlapping series of connections and interests. This connection tension - between the individual and the larger group (singular, because everyone is ultimately connected to everyone else) - mirrors and reflects perfectly the conundrum faced by all marketing strategists: should I target a niche, specialist market (ultimately an individual), or a broad yet shallow one? Messages lose their power when considering too many, but the broadcast mode is cheap and effective.

So my "online" (or rather "networked") presence and activity is about defining my similarity and uniquenesswhen compared to others, so that I can be targeted either as a faceless (or identityless) mass, or reached out to in rich and "meaningful" ways. This is worth picking up on in itself - by establishing a machine-based approach to "richer" understanding of a niche market, are my consumption preferences more likely to be similarly richer, and more engaged? Are those with heavier ideals and philosophies in fact more likely to be responsive to this richer, more targeted ("customised"? "local"?) approach to consumerism?

Let's take things like the Fairphone, for example - which I pick as an example precisely because it's a brand that I am deeply, emotionally attached to, on a personal basis. I unashamedly own a Fairphone 2. But that, there, is the key sentence. I have been through the Fairphone marketing machine and bought into their philosophy - I believe it aligns with my own, but if we're dealing with capitalism then we're dealing with the existence and survival of a company, at the core, not my own survival.

I appreciate the spirit and the openness of what Fairphone are doing. But it is not the values themselves which are important, but the fact that the values exist and that I've bought into them alongside the device itself. This is the richness of consumerism which we live with today, one which binds to our souls as well as our wallets. And "the social network" (whichever service, but defined by identity, metadata, connections, and self-labelling) is the corresponding media for a more direct route to that soul.

But these, in time, became staple goods, and didn't need much marketing any more. Gradually everyone had electricity and migrated towards cities - white goods were just taken for granted, and marketing wasn't as effective. A more nuanced model was needed, beyond the simple consumerist warfare of deciding between brands (moreso than models, which are defined by price bands anyway). These days, everything is generic - Android devices built by large multinationals are largely compatible with cheap throwaway devices from Chinese mega-factories.

We still have white goods adverts, of course. But I suspect these will increasingly become linked to sales, not "general purpose" advertising - the lure here is in the price, not the audience. For everything else, we will find what we purchase to be linked to us through our emotional/philosophical self-identification, a double-whammy of rationality and irrationality, happily crafted in our spare time.

Where does this leave us for the "(self-)quantified self"? Why am I here, online, on all these social identity grids? If I were to quit them all, would the UK economy fall over?

(For reference, it's clearly doubtful that many large tech companies interested in advertising pay any UK tax anyway. But could undermining the new form of advertising make the route-to-market for new products, and reasons to spend, less effective?)

I spend a lot of time installing adblockers and plug-ins which prevent tracking. Why bother? Do I really retain a sense of "independence" and impartiality as a result? Is the network I see one which is unfiltered to the point that I can maintain some sort of "authenticity" as a "free" consumer? Or am I just being paranoid about the effect that adverts have on me? How do you even go about measuring that?

On the other side, why bother banning advertising things like cigarettes, or alcohol aimed at under-18s, if they don't have some influence? So am I better off in fact choosing a filter bubble in which I have pre-selected the products and lifestyles which interest me, or blowing away this bubble, and getting the "raw feed", untailored and sporadic, an entropic marketing landscape, (sort of) like in the old days where nobody could choose.

I'm not convinced these are the correct questions to be asking - they lead me into a trap and a dead-end, and anxiety that returns me to the starting point of the whole thing. Why am I on this internet, revolving around garish news items and amateur memes?

At the larger picture, it is not just products advertised to us that we trawl through. When we sign up for a service, we're ignoring the bigger question - what is this service, and what does it want from me? The "convenience" of modern technology has masked its origins, and we're readily, happily going along with that. Adblockers in Chrome is a prime example of the hypocrisy involved in our usage - Google and anti-consumerism do not mix.

Maybe a future post will look at a way to assess the services that we use, in an effort to make it easier to make these decisions. A convenient anti-convenience measure, to be deployed in the blink of an eye just when we're signing up for something. And/or maybe a way to assess the number of dots we're joining to ourselves.

In the meantime, I'm enjoying exploring services not backed by shareholders. Identity needs to be kept fluid, because disposability is key to agility, and to happiness. I am not who I was a year ago, and there's no reason to connect my memories to my intentions.