Build the next punk layer 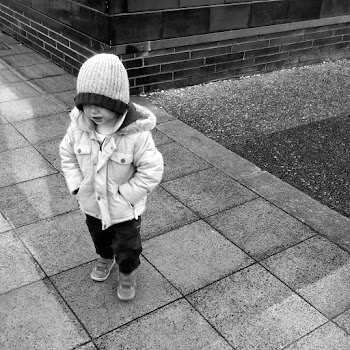 "I hadn't wholly mapped out my talk, leaving a section open for improvisation and the whims of fate."
- Patti Smith, M Train

It's Wednesday night and we're recovering from the shock of a pale layer of snow this morning. There are times when being a parent has this background emotion, a kind of cross between nostalgia and hilarity, like your entire life so far has been a brilliant, joyous waste of time.

Anyway, I'm currently digging through M Train by Patti Smith, which called out to me in a tiny bookshop in Hastings, tucked away off the old town, lined with home made journals and notebooks. M Train lured me in with its insistent monochrome cover, dammit. I paid in cash because it felt right.

On page 64, Smith mentions her connection to William Burroughs and the Beat generation. Coincidentally (?), Burroughs also came up this morning (or was it yesterday? I don't do time anymore) in this conversation between Tim Leary and William Gibson, on the overlap with Neuromancer. I'm going to have to go back and read that, it's been far too long.

Among all this, I'm struck by a certain situatedness, a resonance with a particular point in history. Maybe that I'm an 80s child, that odd era filled with indulgence and never really questioned or relinquished.

It's weird talking to people 10 years younger than me now. I lent the film Hackers to someone at work (a fellow politically-minded developer) and he remarked that he couldn't really tell what technology in the film was "real" and what wasn't. The 90s were incredible, looking back, but my own field of vision, I realise, was guided by trying to make sense of the sheer surrealismof Thatcherism, of the indulgence of the 80s. And as the "cyber" (so big right now, but so life-cha(lle)nging back then!) kicked in, its edge-based, alternative populace brought with it all the counter culture of the previous generation.

There are layers of punk here. Punk isn't really the Sex Pistols and safety pins and hair and what the mainstream have come to perceive it as. It's always been about challenging, about presenting something different.

And so much of it has been captured and exploited and packaged and sold on, yeah. But a lot hasn't - a lot of those layers, from blues down to maker culture, have become embedded in our infrastructure, to the point we forget they're there.

As an 80s kid, it's my duty to resurrect that, to carry the message on and set out the next layer of punk maturing. Drugs and Cyber have been done, and Nostalgia is ready to get in the way and disrupt that regenerative process.