Some symbols are embedded in the land 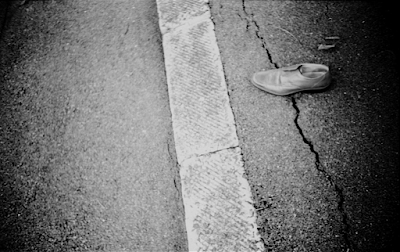 2011. Resident tourist. Homeless, with family and car. That feeling of travelling, of being somewhere new and strange, even within a few miles of where you’ve lived for a decade. The neighbourhood presents unknown corners at every turn. That feeling of being alone - or rather, of everything you’ve ever known suddenly becoming minuscule - just by moving place. Space is time, but also culture, also identity.

Travel, that viral economic disease and past-time spreading out from the 19th century, technology merrily transplanting us from one context to another, making everything familiar seem out of kilter. From majority to minority. From routine and mundane, to novel, bizarre - we become either intriguing or bizarre, only these, never anything in between.

We are torn in two by this! This backdrop of norms, shredded into an individual of unnaturalness, carried purely by displacement. We carry our homeland and our family line with us, safely wrapped up in the swaddling of DNA, a ticking seed that has the power to sooth difference, to disrupt communities, to bring rare life spices down biological trade routes, into the arms of waiting future generations. Nothing will ever be the same again. 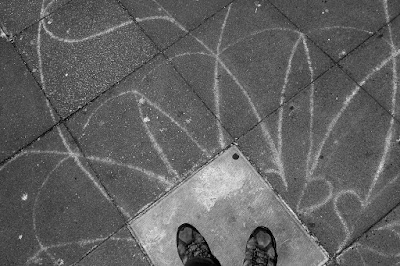 Some symbols are embedded in the land, so obvious that we have no choice but to ignore them until the time comes.

The Long Man stands with his - maybe her - arms holding on to two lines. Poles perhaps. Up until now, I've deliberately chosen to see them as a door frame, a gateway with the figure on the threshold. I see the outline as a sign of entering, of moving from one state to another.

The poles are on either side, sinister dexter. What if they are simply opposites, two extremes that the figure is caught between, or trying to hold on to? Two different directions, both equal in size and stature, but separated in space, with our figure caught - our catching them - in the middle. A figure formed by opposites.

The opposites become the doorway. The difference becomes the gateway and the agent of change.

A black woman buried in white cliffs. Black inside white, yin inside yang. The female hidden within the male. The soft within the strong. A shadow inside the light, like an echo within a sound.

The earth records the difference and breeds flowers and stories alike. 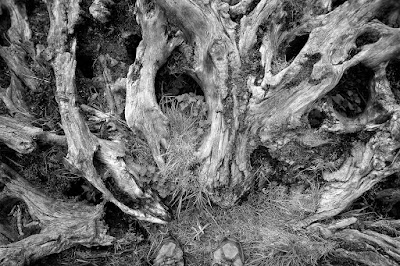