From "Five Letters from an Eastern Empire" by Alasdair Gray (my emphasis):

'We are so sure there was one that we did not inquire about the matter. The old capital was a market for the empire. When the court came here we brought the market with us. The citizens left behind had three choices. They could starve to death, or beg in the streets of other towns, or rebel. The brave and intelligent among them must have dreamed of rebellion. They probably talked about it. Which is conspiracy."


A little book I picked up second-hand, missives from an imagined land. Give me a shout in the next week if you'd like to read it and I'll send it on to you. 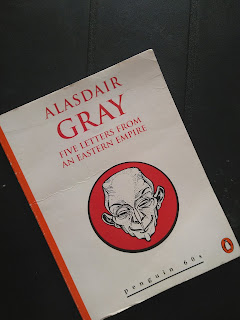