A little while back, a conversation with James reminded me that I've built up a small selection of historic tech-related books that amuse or intrigue me. Blog content if ever there was some (and a good chance to test emailing to the blog again).

They've all scattered to the strange corners of my house, like the dust sprites in Totoro. This one was too big to hide away though: 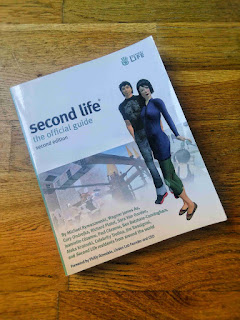 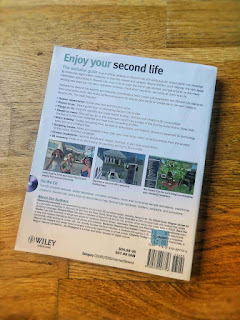 "Second Life: The Official Guide" (second edition) is a big chunky thing covering all aspects of getting into the virtual world. Is it still going? Yes, according to Wikipedia - wow, I'm almost tempted to try it out again. I wonder if I still have my login details.

I have a bit of a soft spot for SL. Years ago, for work, I did some interviews in the world for how data visualisation could be taken into interactive, 3D realms. I chatted with someone from SL inside a giant flower. I saw some of the work that Daden Labs was working on, like visualising flight tracking. There were recreations of campuses and consultation exercises. The places were largely quiet, but intentionally experimental and therefore of interest.

Looking at online worlds now - especially Roblox which #son1 is into - I wonder what impact SL has had on the online world experience through time. Roblox and Minecraft seem to have enjoyed massive success in basically the same vein - Roblox in particular lets you create and script objects, upload textures and avatar items, acquire money-like tokens, and create your own whole games, which often venture into "world" territory.

However, the defining lines are subtly clear. For one, the target audiences are worlds apart. Roblox and Minecraft are geared up towards younger generations, whereas Second Life always felt like a world for adults (adults that somehow had time to get into a while 'nother existence, which seems to me isn't many). Conversation in the former are very moderate and limited, but users come together over their love of gaming - even if this means just a sense of joint exploration or revelry. The "community" crystallises around the games, which manifest as a thousand separate server instances. SL, on the other hand was only ever one place, and the community was based on that - one large "Second Life community" that was coupled to the virtual world and, by extension, the company behind it. (Yeah, I know I speak as an uninformed outsider on this. But that's how it felt, from the outside.)

Perhaps it was difficult to truly create one's own sense of community within that context. Or perhaps the freedom offered by richer chat and engagement meant there were just too many rules to negotiate, too many rituals and cultures to learn - too much like real life all over again. It's funny that game-makers consider how well physical objects are re-created in virtual space, but not the intangible lines of interaction thta truly define us. Relationship rendering, anti-aliased and texture-bumped for human imperfection.

This book isn't as nostalgic as some of the others I have, but it does remind me of a time when virtual worlds were still something of an emerging oddity rather than a massive hit, with kids' annuals and global superstars. It felt like the worlds imagined by cyberpunk authors were strangely achievable, and we were still figuring out what the attraction of human life was, played back at ourselves through graphic cards.

Maybe I'll see you around in there one day.