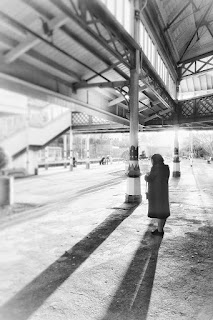 Up in London, but this shot taken exactly one week ago. I'm up for Chinese New Year, and can't help thinking about the scale of lockdown in China going on. What would happen if London got quarantined in the same way, or England? 40 million people is insane. And yet not, at human race scale.
We're used to moving around now. Travel is no longer the luxury it was several decades ago. Movement of goods, money, people - I could dig into Brexit and the splits between who and movement benefits, but underlying it is a more intriguing notion: that movement is a form of fluidity mirroring the natural flow of the universe. We are drawn to Flow for all things because it makes sense at a systemic level.
Locking down movement feels alien and backwards now. Yet not so long ago, the physical and mental borders between lands and states, the ones leading up and reinforced by continual wars, these were the status quo. Flow was an absurdity, migration something that happened for leisure, once or twice a year, ringfenced adventure.
Yet, exploring stories of migration, this mindset was only ever partial. As we dig into re-establishing borders, we will discover more and more that this narrative of "staying in our place" was only ever a fiction, and a temporary one at that.
The travellers have always been with us, silent and powerful.