Sometimes you need a few days cooped up before being allowed out with sunshine and eyes in order to find out what you were missing previously. Stop taking things for granted.

Also posting some more shots over at https://exmosis.net/disposable_evidence/ because I'm chaotic and indecisive like this. 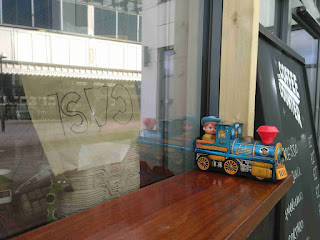 [A lady bought me a few free coffee. This was unexpected but do bring on the gift culture.] 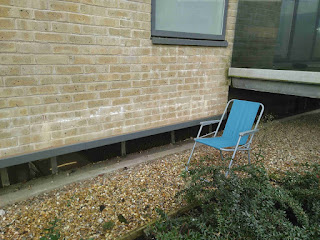 [I am more intrigued about when someone sits here than who or why.] 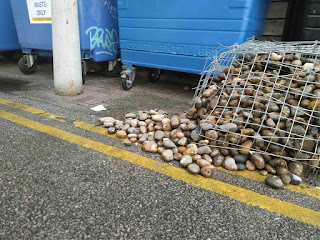 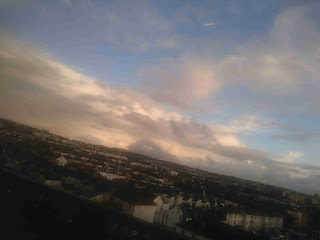 1. A small selection (about 10) of my photos are published now in Black and White Photography magazine, available nationally. The photos are taken from a 2-year-long project to document the local duckpond (I'm not exactly a travel photographer...), and this is sort of the first step in moving from taking the photos, to getting a 'finished' selection. It's probably the first time I've done a photo project on this scale, and am learning a hell of a lot from it. 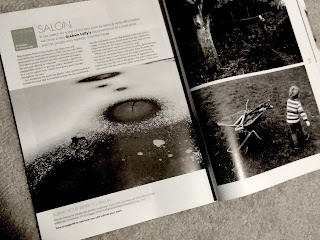 2. A new collection from James, 'Cows don't believe in Slaughterhouses', very calmly and kindly dropped through, on to my doormat the other day. I always enjoy reading James' work with its measured approach to throw you or make you smile. I particularly enjoy the way his coherency builds into a single point that strikes home like an unnerving itch. You can read more and contact him about a copy here. Just do it, he won't mind.

(Also sorry I don't know how to capitalise titles any more.) 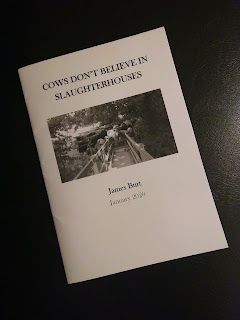 3. In sadder news, the smallest bookshop in Brighton, at the Open Market neighbouring the drifts of the Real Patisserie, has brought down its shutters. An old tour of the tiny space is out there on Facebook until bit-rot sets in. The selection of sci-fi paperbacks was awe-inducing, although I never bought any. I can't remember which books I did buy there, except for an old library copy of Balestrini's Tristano - version 11,778 to be exact. As each copy is a unique shuffle of paragraphs, I got it to go with my version 12,652, with some vague plan for bibliomancy. 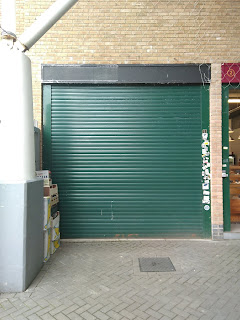 4. Among the few decent bookshops left open in Brighton is probably the Amnesty International second-hand outlet on Sydney Street. I picked up a couple of intriguing looking older books up my street - one on Alternative Technology, and one on War Games during the cold war, and the application of game theory. Now I just need to switch off all the screens and get a decent chair to curl up in, forever and a day. 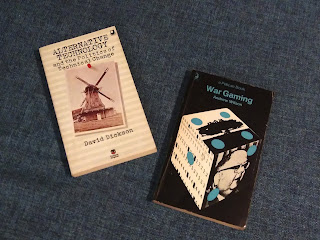 Out of procrastination, I'm finally playing with hooking up webmentions to a couple of blogs. If you've not heard of them before, then they're sort of a re-invented pingback that automatically alerts someone (in various ways) when their blogpost/page/tweet/whatever is linked to. That's about as much as I know, but the indieweb webmention page is the best resource I've found so far, although I'm following James' lead here really.

I'm using webmention.io's remote service for now, just to get something up and running - links to replies come into my RSS reader in a fairly basic way, but don't tie in with blog comments or anything. I haven't played with hacking around in blogger.com in ages. (I found Keith J Grant's posts a good starting point for the basics of hacking together the required parts.)

The funny thing about webmentions, as I start getting into them, is that you don't quite know if someone will get mentioned or not - "you never know who's listening...". Sounds creepy, but I'm more tickled by this slightly chaotic notion than unnerved by it. (eg. I guess some of the links here will fire off alerts. But the one to James above may not, if his Wordpress setup doesn't support webmentions on homepages.)

[Edit: See, I'm mixed up already - I had assumed I was sending mentions, but I think this blog is just listening, so far...]

I don't know how long I'll continue to post via blogger.com - it's all fairly legacy, I prefer self-hosting (even if my backups fail), and I'm not sure webmention works very well with Blogger's auto-country-URL-switching; I've found webmentions only work if you use the .com version of this blog, not .co.uk or anything else. So reliability may depend on the location of the linker. And then there's the reliability of Google as a service provider anyway.

However, the re-invented work notes blog over at https://6work.exmosis.net/ runs on Wordpress, which is much easier to add webmentions to via the handily-named Webmentions plugin. (Consider this a notification test for myself.)

Longer term, I want a self-hosted, really simple site which does basic formatting and images, and I'm not convinced I need the overhead of PHP for that.

Some next steps I want to play with over the next few weeks (alongside everything else in life):

Should I get rid of my Kindle?

[Update: Whoa, that was weird. This post posted 3 times, for some reason. Probably a low level network connection glitch, like everything in life now from mangoes to mental health.] 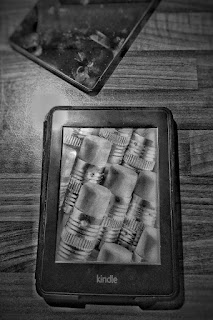 I got my e-paper Kindle out the confounded tech drawer last night and gave it a charge up. Pencil rubbers mocked me from its silver screen, a guffawing reminder that its presence was here to erase the art of handwriting, not to rescue it. Still, I like it's simplicity, the way it has its limits.

But should I keep it? How does it fit in? I'm a bit torn on this - the Nexus tablet (lurking in the background of the photo, like an advanced ninja waiting to pounce) is there for reading news feeds and saved articles, and has expanded out to being a manga reader too. It's the reading form I use most, between the two tablet-shaped things.

But I haven't put e-books on my Nexus yet. Should I?

Things I'm not sure about:

Maybe I need to deliberately read something on my Kindle to get used to it again. Maybe I need to strike out and just read e-books on the Other Tablet. I'm not sure I'm quite ready to give up on e-paper just yet.

* Clearing physical space is so much more satisfying. 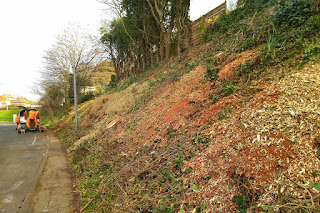 Trees gone. Coronavirus has nothing on Dutch Elm disease. 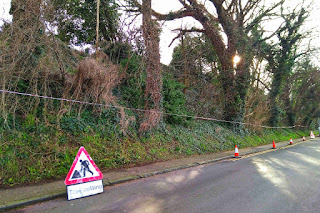 Moving on to bigger politics

Caught up on Phil's post on the failure of politics which digs into the state of voting and why politics is pretty depressing to some of us right now:

Boris Johnson produces a good upbeat impression of politics. But even the people who voted for Johnson don’t actually believe it or trust him. They voted for the spectacle of of a bumptious toff offering fake solutions (an “oven-ready deal”) to a fake problem (the EU).


Like Phil, I haven't really been posting political stuff over the last few years. Some of that is just stage of life and not having the time and energy to assemble thoughts into something coherent, and something I'm happy publishing. I don't really have the time or energy to have follow-on discussions either, and taking it to Twitter is like ... well, it would be more productive to beat myself with a heavy stick.

I'm also staying away from public opinions a bit more for 'professional reasons' - I haven't really reconciled being a senior member of a company that needs to be politically impartial with my own public practices. C'est la vie.

But then, I'm not sure I ever have been particularly partisan anyway. My interests and approaches don't ever seem to fit in with a 2-3 party system. Politics carries on whatever the vote, and often feels more tied to the individuals in power than parties.

The bigger picture is more interesting, scarier, and more so for being clearly in our face, like climate change. John Michael Greer has an excellent post, 'The End of the Dream', tying together the rise of the spectacle, the mistrust of 'experts', and the kickback against managerialism and the assumption by those in power that people are here to be controlled.

It reminds me of my own distrust in things, garnered from growing up through an educational system, which recognises that the methods of a 'technostructure'/'biopower'/'surveillance state'/'testing culture' - while productive and convenient - are not there to encourage anything unprofitable, including creativity, happiness, and communities with little to offer after they've been exploited.

(Yes, you can view communities in the exact same way as land under this view - resources which are provided with support only as long as they produce value.)

The populist backlash that put Trump into the White House and popped Britain out of the EU, he argues, arose in response to the takeover of the public sphere by the managerial class, and will continue until the working class majority knows that it can get its concerns addressed and its needs met by those in power.


And picks up on a key point on why politics is so depressing for me - it deals in symbols, not what I would like to phrase "practical hope".

He insists that the populist movement has no policy goals of its own—no, of course not, it’s simply reacting blindly against the policies of the managerial elite—and that if the populists win and displace the managerial elite entirely, then the result will be the triumph of demagogues who have no constructive policies to pursue and who will not enact any of the reforms Lind considers necessary. It would be much better, he insists, for the managerial elite to welcome working class majorities back into the decision-making process in politics, economics, and culture.


These days I spend a lot of my time, as a comfortable male manager, wondering if I'm the 'elite' or not. I don't know if this is defined by material wealth, responsibilities, or what. I think maybe it comes down to something else - attitude. Which, in turn, influences how you wield your influence.

Attitude is not something you can be trained up in - or not formally, at least. For training, one must look more to things like Buddhist and other Eastern approaches, such as doing the hard work on Loving Kindness meditation. Stop up the mouth, block off the eyes, listen to the world, and become a mendicant.

I digress. And yet I don't. What we're talking about here is the fundamental ability of Democracy (any version of it) to connect people. It's why citizen assemblies are, I think, so important - not because they reach a more 'effective' or 'productive' outcome, but because they encourage us to explore the connections between the differences we have, which in turn stops us from literally killing each other.

Writing this post has got me fired up again. I think I might have to read Lind's book, along with a hundred others. I have time, want to do more in this area, want to disrupt it. I need to define the challenge, find others making the same moves. It's 2020, for god's sake. 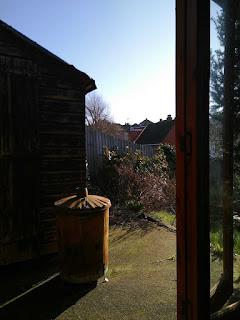 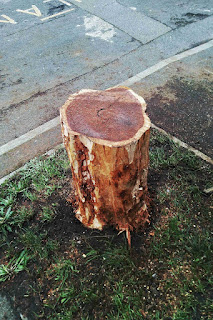 Death turned into a final count. Taking stock of survival as rings around the sun.

"...a moment's consideration will teach, that however baby man may brag of his science and skill, and however much, in a flattering future, that science and skill may augment; yet for ever and for ever, to the crack of doom, the sea will insult and murder him..."