Just read James' South Downs Way zine that arrived in the post (see last post, blog post post) and wanted to add a note here that you should go and ask him for a copy. It's short but so very well crafted, with hints of journeys and lives criss-crossing like ley lines. I know James is exploring some sort of 'magic of walking' theme (in the book, in his broader project, in life, who knows?) and the zine is infused with a real sense of that. Not to be missed. 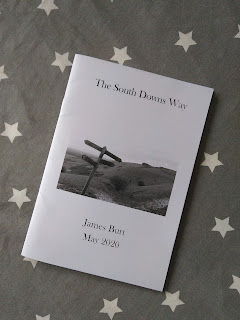 Elsewhere I'm getting back into graphic novels a bit. Mrs Scribe watched the new Joker film which I sort of got bored of halfway through, but it did make me want to re-read a whole bunch of Batman, and catch all the classics I've never read. So step one has been to order in The Black Casebook and The Killing Joke - the first is based on this Grant Morrison reading timeline, and TBH I don't think I've read the latter, which is exciting but slightly sad. Anyway, I'll hit those up then dig into the rest of the Morrison plots.
And I'm also browsing the Amulet books by Kazu Kibuishi, as I found them on my local library's ebook list. The first two are a good romp, here's a screenshot of one of my favourite scenes: Getting slack on posting about post. Changing that quickly. Post has become my way of seeing parts of other worlds a little bit, and I'm annoyed I'm not sending more, but there we go. Maybe this post will spark something... 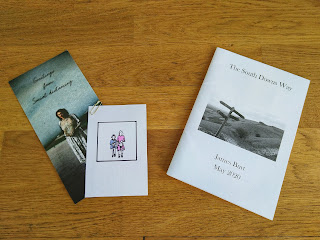 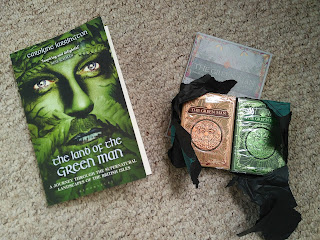 Left: The wife knows me well, and found this fascinating-looking book on the green man and Britain for my birthday.
Right: Wow, my Jocu Green Man card decks arrived finally, complete with booklet and custom coins. I'm giving the coins to the kids to help them celebrate the Green Man, and I'm afraid to break the seals on the cards, but also want to use them to instigate all kinds of sorcery.
Scribed at 9:38 pm No comments:

Took the kids for a walk up Seaford Head yesterday... 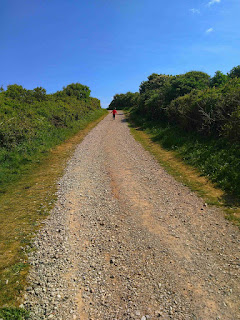 It seemed very strange to see so many people around. I've adjusted to solitude, I think. 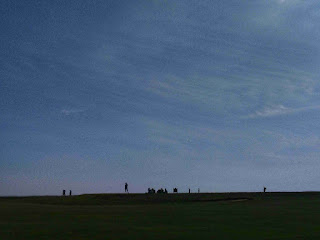 The golf course re-opens tomorrow, so it'll be harder to get shots like this I guess. 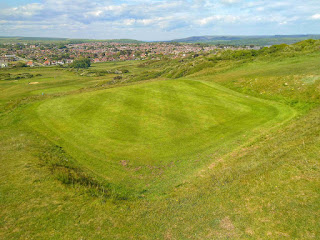 Good to get back on the paths again though.
Scribed at 11:49 am No comments: 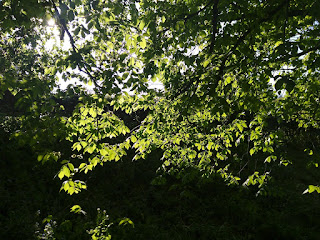 Hey blog, sup? Thought I'd do a random check-in as, somehow, mercifully, weekend lie-ins seem to be coming back into fashion after a decade or something. The boys are playing Minecraft on the Wii U, which proves some things don't change.
Life is same / not-same, and I'm wondering if the changes have been more profoundly subtle than I have taken for granted so far. In general, nothing has been removed. Yet plenty has been added, and I jump around things - often literally, when I'm wanted on the trampoline or a good tune comes on the kitchen radio, but usually mentally with a monkey mind.
Some threads going on...
Home schooling two kids means you're being asked to look at 3 or 4 different mini research areas at a time, in addition to looking after some basic maths and literacy practice. This week we've been looking up Ramadan and rainforests (not been able to factor in a reading of the Vorrh, sadly), life-drawing snails, making up a collaborative cards/2D10 numbers game, making alien maps, etc.
Work seems to have exploded, although I don't think it's virus related. It seems to be more the fact that everyone is looking into a bunch of massively complex and often frustrating things at the same time, pulling out a few roots, and I'm needed in a lot of them somehow. Constantly jumping between devops task wrangling, annual reviews, and company strategy headscratching. Buh.
Enjoying doing the new Beamspun newsletter, but I've got lazy this week and not bookmarked any links in advance, so going to have to catch up on that this morning. Finding links, checking out links, and even writing a few small but interesting paragraphs definitely not to be underestimated. It's also making me think a lot about narrative and power and storytelling, and I wish I had time for more of that right now.
Generally I think I'm getting a metric buttload of ideas going through me as everything has gone either weird or disruptive, and my brain wants to turn that into "outputs". I'm even posting to Flickr again, and sending photos to various contacts. I think photography is my goto mode for dealing with things, like my form of therapy - a way to get something positive, reflective and even beautiful out of the chaos around me. See, now I'm thinking about running "photography as therapy" support sessions for people. Shush, brain!
Also, there are no decent steganography apps for Android, and/or the Web 2.0 does a great job of mangling raw image files that get uploaded?
I would dearly like to be able to go to the Post Office safely again, so I can offer bigger things and international post on my Etsy shop, which is currently "on holiday". But the PO, with its close-quarter shelves and many vulnerable people in multiple queues, seems like an irresponsible place to go for frivolities at the mo.
Reading quite a bit (for me) which is really nice. I'll carry on posting updates on Goodreads when I can.
Last weekend of being 40. Time to get on with being proper middle-aged from Monday. Already got whisky and a red car and a book of crosswords though, so I think I'll just skip to the next stage of full blown Con Club membership and feel young again.
Scribed at 8:40 am No comments:

This morning's listening: Catching up on GHOSTS V and GHOSTS VI, released by NIN back in March for free. A bunch of unexpected Monday morning organising needed at work suddenly, so some epic and calming stuff is proper what I need.

Music what reminds you to breathe and see through structures.

And of course less than a month after my post describing Blogger as "antiquated", they only go and give the thing a UI spruce-up, don't they? Maybe there are only 4 of us using it still and so we all get listened to intently.
Not sure whether to be pleased that Googly is giving it some love, or afraid.
Scribed at 9:46 pm No comments:

Valuing humans and stopping in an age of profit

Just posted this in a semi-private forum, but wanted to keep a record of it, and open it out a little. I don't know - I think the ideas here tie in with my daily work, which I'm reflecting on a lot as a result of working from home full time. But also they tie in with ideas of simplicity and minimalism coming out of solar- and tao-punk ongoing 'practice'.
The forum started chatting about the value of doing nothing, and why this seems like a rarity these days. There were two threads which I summarised below, but I'm keenly aware there are whole histories of work, religion, productivity and wellbeing that I am mostly occluding for the sake of my own sanity.
1. Up until the rise of a) technological automation and b) money-generating-money (call this 'economic automation'), manual labour was a key part of society. Not only did it keep companies profitable and countries with armies, but it also meant that people were kept 'engaged' in work.

(Note - This 'engagement' covers a broad spectrum of willingness, from slavery through to some sort of idyllic notion of 'working the land'.)

During this time, many ideas in society developed to keep people both 'hygienic' (physically and mentally well) and 'productive'. The idea that 'the devil makes work for idle hands' and that toil keeps us focused is still around today - and for good reason. Knowing what you need to do - whether set by yourself or others - is a fundamental part of identity.

However, after the onset of automation (technical and economic) in the last 200 years, the value of manual labour has declined - or, to put it another way, the relationship between labour as valuable to the individual, and to others, has unravelled. While society does still depend largely on manual labour (eg to pick fruit and veg, as the UK is finding out...), it is a lifestyle which is increasingly hard to think of as 'reliable'.

The narrative has shifted, perhaps, from 'work keeps you fit and sane', to 'mental health is important, so meditate'. Taking breaks, talking through issues, using apps, etc - all these are responses to such things not being valued in our work more broadly, not being a part of *what we do as groups*.

I find this strange. Why do we devalue our own sense of health in order to fit in as robots? And should we look to organisations to lay on counsellors and massages, or should we be trying harder - as employees - to request and/or enforce "more healthy work activities" to start with? What could that look like for different industries?

2. Which brings us back to valuing silence. Because silence is the ultimate example of this - the antithesis of busy business with its always-on, visible production modes.

Silence represents stopping, a lack of output, inaction. It is a terrible and fearsome thing. It cannot be measured or improved, and is fairly difficult to even communicate. And yet, through silence, we reach ideas and realisations. We rest and reflect.

The "old" ritual of church-going and prayer on a Sunday (some of you may still do this) - was/is this a deliberate interjection from the never-ending world of work? (Agriculture is hard and constant.) In the rush to lose religion from society, did we just charge into a world of always-connected-work, and then always-connected-distraction?

Do we now reject silence, afraid that we're either not generating income, or not getting the most out of our expenditure? Have we each become our own little mirror of a profitable enterprise?

Is to embrace silence to laugh in the face of 'profit' then? To accept that to be human is to stop and just exist for a while? Why is this such a 'guilty' pleasure these days - unless stopping makes you anxious?

That's as far as I've got. I carry on looking around me and seeing everyone rushing about, even in lockdown. It feels ... odd. I'm off to have a beer in the wind. 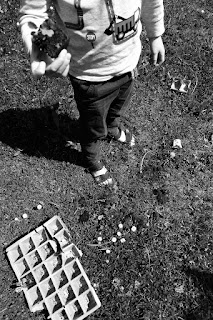 Checked the garden seedlings this morning, only to find one of the trays had been scattered and shredded in the night, by a fox I assume. The local youths aren't that bad. We gathered up the shoots we could find and hastily reported them. Hopefully we'll have turnips in the autumn yet.
Lazy long weekend here. Bit of a break from screens, trying to reset the mind a bit and bring it back in line with the shoulders and the abdomen. Everything still strange, but the people I talk to seem to prefer it. Feeling oddly hopeful, perhaps. Are we allowed to?
Scribed at 9:58 pm No comments: 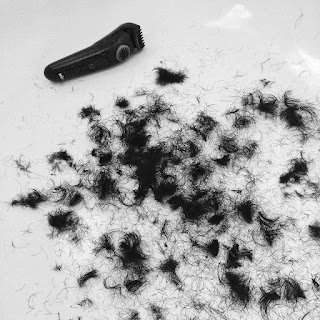 Bit the bullet this weekend, with the help of Mrs Scribe. Won't post the selfie.
Scribed at 10:43 pm No comments: