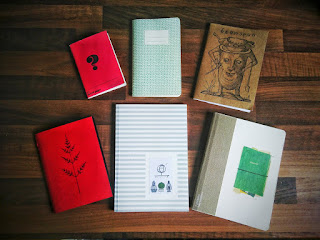 Mentioned doing a notebook round-up in a previous post, so here we go 🤗 I've always used notebooks (and kept them, much to my storage system's chagrin) but recently I've been choosing them with more "intent". I'm trying out a notebook to capture each project or set of thoughts, and half the fun is choosing one which I think will capture and reinforce those thoughts as they get entered in.

Top row from left to right:

1. Taopunk-imaginary-lands - a background project to explore a made up place capturing taopunk values.

2. Symbol doodling - blurring into logos and diagrams, for when images are more powerful than words.

3. Beamspun - for ongoing and emerging thoughts (currently around the idea of Disruption in all its forms) for the Beamspun blog/newsletter project.

4. Handmade fractal-scribed black paper notebook, to use the lovely new white-inked pen the wife got me. This one is for current thoughts on splitting and re-joining identities, existence and so on. Somewhere between taopunk and Twin Peaks. The cover is experimental, but I'd like to make more in the same vein.

5. Collecting together a story being prompted by the first Paper Arcade volume - two more sections to go, but I'm enjoying the exercise, even if it's stalled for a while. Ink feels so much more final than digital, even when I know it's not.

6. For I Ching readings.

Notebooks. For when screens are too bright.

The Network is the Weapon

I recommend a read through this FT article on Cognitive Hackig, TikTok and the use of AI to hook users - it's not too revelatory if you've been following tech news, but it's succinct and well researched, and sadly I don't think the message about the dangers of modern tech is being spread widely enough (he says, still posting to a Google blog...)

In particular though, we can start to see the extension of Web 2.0 to perhaps 3.0. Whereas 2.0 was, in hindsight, all about turning the user into the Product, the new round seems to be about turning the user into a Weapon - the phrase "weaponising" is becoming increasingly employed around our own behaviour, and the actions we trigger through how we amplify and endorse political emotion disguised as information. (This could be an alternative definition of "disinformation", in fact.)

Suddenly the naivety of myself 'just' abandoning social networks is thrown into a new light. The control of online behaviour is likely to turn increasingly into a battle for a wider power than advertising money. Indeed, given the capture of politics by capitalism in the first place, it's almost strange that the separation of more overt politics has been kept so distinct already.

This s an intriguing development biting at the West - the networks and techniques developed around user addiction and big data have made their way into states with mass population control in their blood and intents, and nobody seems really sure about how to detach big money from big states. Europe is defining the battle along personal information lines (such as GDPR) which is good, but needs more encouragement for users to engage and understand data and why it's becoming dangerous. America are adopting the old wartime spirit of using national borders to fend off influence, but mainly because they want that control for themselves - see TikTok.

And the third aspect in the mix is, well, until at what point do we actually understand what our own deep-scanning algorithms are doing? At what key event of complexity does some emergent system behaviour produce shocks that we can't predict, and don't have the paradigm to analyse and interpret, let alone the scientific and social solutions.

You are the Weapon. As the networked surveillance technology permeates ever more into not just our devices but our streets too (hello COVID and smart cities, looking at you), the ability to track and influence populations will become ever more like a tabletop game with thousands, millions, billions of tokens. You, and all your friend, are the new soldiers.

Writing. Hard. Not feeling the energy or mood to really get words into a
publishable form at the moment, but I figure it's good practice.
Cohesiveness is not my middle name at the moment, although partly that's
because I'm also being cohesive in many different areas. Summer has
turned into a routine, but one broken up by the novelty of routine. I'm
working on a lot of things, just not in my usual places of output, not
at my usual speed.

In the tech corner, I've been continuing my solar power trials, and been
running a laptop off solar power for a few months now. This is the first
time it's hit the mains in a while. I should write that up on the 6suns
blog. The solar power side has tied in with more time in the garden,
growing things, trying to reconnect and relax. That's also kept me away
from online interaction so much too - I had a couple of months where I
didn't really worry about email or RSS streams (and I'm not really 'on'
Twitter or Mastodon much any more). That's been an interesting shift -
growing things and solar power share a mindset which is quite different
to modern digital living: a cultivation and storage of energy in order
to grow, rather than a constant barrage of pressured actions, each
isolated from the last. The two don't necessarily mesh well either - I
struggle to post simple updates of what's growing (beyond the odd photo
of an unexpected event, such as caterpillars). The pace of energy
cultivation is a slow and careful one.

I've also been playing with syncthing again, for local-device
synchronisation. I keep having plans to sort out all my digital notes
and combine them with my online outputs, and have been using rsync a lot
more over the last year. It would be nice to not be dependent on
Dropbox, but contingency is a big part of plans once you move more
towards self-hosting. Also, Markdown parsing and HTML output always seem
to take up more time than it should.

I've been writing - I'm two chapters/playing cards away from a first
draft of "something", a journalling "game" providing 13 structured
prompts via a deck of cards. It started out quite fast, and I love the
feel of pen on paper, but I'm not a great completer-finisher. I think I
know where I want the last paragraphs to go, but in my head there are
some critical gaps I know I want to fill still, and I struggle to make
the time to carve out those final links.

I've been learning some Roblox coding, which has been fun to learn a new
framework - especially one which produces 3D worlds at the drop of a
mouse button. It's bizzarely exciting to be able to create worlds so
quickly - previous worlds were built on top of other people's Java to
create MUDs, or have been simple maps. I seem to be doing a few bits of
worldbuilding currently. Anyway, I'm thinking maybe an virtual gallery
to bring in some of my photography might be a good exercise.

Speaking of photography, I've been shooting film again but need to bite
the (expensive) bullet to get haf a dozen rolls developed. I'm getting
back into some experimentation - both analogue and digitally - but seem
to have reached a point where I overthink publishing the results, and so
a lot of it ends up gathering silverdust. I'm middle aged, and know too
much, it seems. But there are some really interesting ideas emerging
around virtual travel, in-game photography, and the interfaces we see
the world through. I've been on a few 'excursions' and got some
intriguing shots, but curating and publishing them is a whole 'nother
exploration in itself.

I've also been reading and playing old games a lot. It's funny going
back to basics - being disconnected while you enjoy things. Modern
content consumption definitely feels "supervised" now - the way we
report on what we're doing on a daily basis, or our attention gets
automatically shared, or recommendations and tailored ads seep into the
worlds we inhabit. It's liberating to be off-line these days, to just
read for the pleasure of reading without worrying about what's next or
who's going to like if you've liked it or not. Nobody knows what I've
been playing on my Gameboy Advance, and it feels like my own experience
again.

And I have half-a-dozen notebooks on the go, each for various strands of
thought. I like thoughts. I like notebooks. But it's getting a little
silly, especially as the original idea was to keep them close to hand -
carrying four pads around with me isn't efficient. That might be a
future post though, a snapshot of notebooks.

Otherwise I think lockdown and COVID are affecting me in subtle ways I
don't quite get. I can spend more time in the garden and less time
around people - half of me is still liking indulging in the solitude,
but the social side of me is craving a good pub night out. I've been
camping in France for a week, which was great, but threw me a little
too. I'm constantly wondering how much I really 'need', and yet remain
attached to the odd bargain and amusements. A bit of me really, really
wants to go full indieweb / solar nomad / money-free, but to do so would
be to let go of so much in my head.

But hey, I have a notebook for that, so it'll work out.
Scribed at 5:14 pm No comments:

A bunch of fascinating ideas intertwining in this interview:

"There is a long ideological history related to the ways humans control both the environment and Earth's systems instead of understanding design as collaboration within them."

There is also a good part on "quiet observing" as the start of letting design come forth, rather than be owned by "the designer":

"When travelling to these places my aim is to become empty so the place can speak to me through its built structures and cultural beliefs. I make it a priority to allow the peopl, plants, buildings, textiles, mountains, landscapes, etc. to educate me through the duration of the journey"

I like this idea that design is just a way to bring together diversity, transform it into creativity - that we become conduits for something evolving or re-expressing itself, rather than some superhero capable of creating something "new" and "exclusive".

Art and Construction shouldn't be seen as separate. If we're happy taking photos of the world or sketching it or writing poetry about it, this is design, and we can recognise that the same skills flow through us and can be both 'practical' and/or 'aesthetic' as much as we choose.

A printed photo can also provide shade.
Scribed at 8:19 am No comments:

This Is Still Not A Game, Yet

Rather excellent look from Adrian Hon at QAnon, internet conspiracies, ARGs, politics of disinformation, and - ultimately - our own desire for puzzle-solving, discovery and community.

QAnon fills the void of information that states have created – not with facts, but with fantasy. If we don't want QAnon to fill that void, someone else has to. Government institutions can't be relied upon to do this sustainably, given how underfunded and politicised they've become in recent years. Traditional journalism has also struggled against its own challenges of opacity and lack of resources. So maybe that someone is… us.

Also bonus points for bringing back a few Perplex City memories, too.
Scribed at 6:44 pm No comments: