Oh yeah, did I mention that my Sprite Country project is now live? No, I did not. Because I am silly and because somehow think that writing a blog post is a lot of effort. 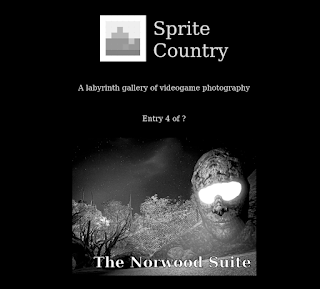 What is Sprite Country? Why, it's a deliberately-obtuse web gallery for videogame photography. A labyrinth of other worlds.

During lockdown, I started getting into some of the weirder titles in my library (including some I posted about at the start of the year), and wanted a way to share those experiences in the same way I'd share my travels in the real world. I don't want to just post "screenshots" in the project though - rather, I see the screenshot as the "negative", and then run through the same creative workflow as I do for any other photo I take.

That is, as photographers, we are always spinning our own version of the world we see. #nofilter is a lie - just choosing framing and composition, in itself, is a fundamental form of filtering.

So videogame photography, for me, has become a process in which my own interests meet those of the gameworld designer. The more I do it, the more it reminds me of architecture photography more than, say, street photography. The majority of the time, videogame photography (especially in indie games) can feel "restrictive" in that the environment has been carefully constructed.

(It's only when you get to generative, algorithmic worlds - or where interesting bugs crop up - that the notion of "capturing chaos" becomes more apparent.)

I attempt to pick my shots in the same way I would if I was wandering around a museum or gallery. I revel in exploring harder-to-reach areas, not (just) to explore the gameworld, but to get a better image. Sometimes that means moving my in-game character. Sometimes it comes down to moving the camera, or even the interface furniture. Each game and each engine has its own opinions about how much control a camera-operator has.

I don't tend to use photo modes for Sprite Country. Instead, shots get fed through the same workflow as my other photos - using Lightroom to crop, adjust brightness, apply monochrome, etc.

Each individual gallery on Sprite Country is a "trail" with a random trail's starting point shown on the load of the homepage. A name is (now) shown, but otherwise the site is deliberately minimalist - just tap or click the screen anywhere to advance through the trail, except sometimes icons will appear that let you jump "sideways" to similar themes within other trails.

I'm enjoying building up that intersecting maze in itself - the structure of the site feels like it should reflect the wandering sense of discovery and the unknown that many of these games weave into their own fabric.

There are five game trails available right now, with more from the last few years I need to dig out and process. There's also a mailing list you can join which I'll send irregular updates to, as well as post some behind-the-scenes shots when I can.

I'm also taking suggestions for more 3D worlds to explore, feel free to get in touch with ideas, or let me know if you're making a game and would like me to see about a trail for it.

More thoughts on the nature of "being online", which continues to plague me. Sometimes I think I should just give up " permanent residence" altogether. Other times I get excited about the opportunities that technology affords me.

An email out from Tracy Barnett sums things up really well. It's worth a few seconds to read it through properly:

"Y'see, we're operating in an attention economy now. Keeping a steady pressure by letting people know about what you've got going is important. It's not that people forget about you. It's that the algorithms behind the systems we use deprioritize you.

"That's a sad, sad reality, I know. The idea that if you're not speaking in ways that are correctly formatted and continually present, the system kind of just makes you disappear… that's hard. Disheartening. I think that's why I like talking about it outside of those platforms. It helps to remind me that the ways we interact online aren't the only things that matter. That there's a valid self that's present and worth more than any algorithm say's it's worth. That's true for me and for every other person online. It's a good thing to remember".

This is unrelated-but-is-really to the Dork Web's article on Escaping the Web's Dark Forest, which digs into the "weaponised" approach to being "public" online these days. The article outlines a key shift in the move to, what was it, Web 2.0?:

"Social media inherited and weaponised the chronological weblog feed. Showing content based on user activity hooked us in for longer. When platforms discovered anger and anxiety boosts screen time, the battle for our minds was lost.

The fundamental link between Tracy's piece and the Dork Web piece is this idea that individuals are now empowered, but only within a form of capitalism that ties money to social feedback. In other words, the (Western) internet has become a place that anyone can profit, provided you're willing to play the love/blame game.

Ironically, we get given so many control interfaces over our online presences - avatar, status, privacy, social media links, etc - but ultimately the emotional aspect of being online can be completely whimsical. One tweet may suddenly get a million responses and make national news. Another identical one may wither into the void. Despite all the configuration options, our sense of belonging within some sort of community is still in the hands of people with the power to publish widely and spin things as they like.

That's probably why I've stopped tweeting so much, and why large platforms have a tendency towards a) banality, for those that understand the risks, and/or b) in-fighting for attention for those who don't (or who do, but are happy with that).

That's not to say I don't value Twitter, just that other spaces are more "of interest". It also sets up a curious conflict between how I amplify things. I'm aware that lots of good organizations " need" to be on social media for publicity, and in some ways I can support them by following and engaging with them. But this leaves me back at Tracy's point - that this attention economy becomes the depressing reality, and then it just feels like I've given in to the banality.

I've started thinking about some spaces as like going to the shop - you don't want to get the functional things, but you have to, so just get on with it. I think that's a shift in my own narrative and expectations - getting away from the idea that Twitter, Kickstarter et al are "exciting" spaces. But that sense of excitement and discovery is baked into them - it's literally their business model. And that makes it really hard to keep the two narratives (theirs and mine) distinct.

Ah well, no answers yet, except that I am enjoying the other spaces I've started using more. Maybe it's time to get a hut in Scotland and just make flapjacks all day.